Ebola and medical humanitarianism in Monrovia

Images have played a critical role in how we understand Ebola, its workers, and its victims. Time Magazine’s Lightbox stories [note 1], National Public Radio’s photographic reflections on key moments in the West African epidemic [note 2], and the US Department of Defense’s photo essays [note 3] have been particularly powerful in this regard. Images of gloves drying in the sun eerily mirror crosses in a cemetery (image 1). An aid worker dressed in full protective gear holding a small girl at once represents the medical hero saving the African child, the inequities between those left vulnerable by structural adjustment programs and those who have access to the latest biotechnological equipment, and the intense human suffering felt by those with Ebola and those medical professionals caring for them (image 2, from John Moore, Getty Images).

Yet, these images inevitably portray only partial truths about Ebola’s effects and the medical humanitarianism projects that accompany it. Perhaps even more than usual, the use of images by states, aid organizations, and the Associated Press to give shape to the Ebola crisis eclipse more than they tell. The images in this photo essay tell a different kind of story about Ebola, focusing on the geopolitics of global health and the state effects of medical humanitarianism.

As of 2 May 2015, Liberia has reported 4,608 deaths from the Ebola virus, the largest number of deaths of any country.[note 4][note 5] By the last week of April 2015, there were thirteen Ebola treatment units (ETUs) operating in Liberia, down from twenty-five at the peak of the response, ten of which were Department of Defense units. Most of the images here are from the Monrovian Medical Unit operated by the US Embassy.[note 6] Taken together, they highlight entanglements of militarization, humanitarianism, biosecurity and quarantine practices, and the politics of global health.

Like other ETUs in West Africa [note 7], the Monrovian Medical Unit is part of the US Department of Defense’s Operation United Assistance in Liberia, a civilian-led medical humanitarian intervention carried out in collaboration with USAID (image 3) [note 8]. As of March 2015, the Department of Defense had spent close to 403 million USD on Ebola including 330 million in direct aid, 47 million on biosecurity, and 25.6 million on research and development, including ZMapp, an experimental drug for treating Ebola (images 4 and 5).[note 9] Researchers aimed to carry out a ZMapp clinical trial in Liberia at the Monrovian Medical Unit and the Elwa-2 Medical Unit, but the delayed response to the epidemic in West Africa meant that Ebola cases were dramatically declining in Liberia by the time the study started. They were able to enrol just one participant and as a result the study was moved to Sierre Leone.

Staffing the Monrovian Medical unit are civilian American volunteers who are members of the United States Public Health Services Commissioned Corps, an unarmed but uniformed service within the national Department of Health and Human Services. They include medical epidemiologists, clinicians, lab technicians, engineers, security specialists, and others, drawn from a range of agencies including, but not limited to, the Centers for Disease Control and Prevention, the Food and Drug Administration, the Department of Corrections, and the National Institutes of Health. Some have worked in Africa before or have participated in similar missions, but many have not, arriving with preconceived ideas and fears about the risks of Ebola and the risks of Africa.

Although civilian employees staff the Monrovian Medical Unit, the operation, as predicted by Adia Benton (2014), is largely militarized. Photographs from within the unit capture the everyday ways in which security and military are embedded in these kinds of spaces and projects. The local Liberian landscape is transformed from empty fields to military-style barracks, surrounded by a razor-wire fence (images 6 and 7). All medical personnel wear military uniforms and ‘dog tags’, and are governed by other military aesthetics like shorn haircuts and uniform demands (image 8). Everyday life for personnel demands a disciplined compliance to regulations and procedures in all aspects of life and work, from informed consent procedures for patient treatment to everyday ordinary life within the camp (eating, exercise, and sleep). Medical professionals at the Monrovian Medical Unit unit are forbidden to leave the site unaccompanied, and are forbidden to go for walks outside of the compound. During days off, personnel are restricted to visiting a small number of embassy-approved sites including the US Embassy and an expat hotel, leaving some personnel feeling frustrated, and others confused about their roles in the medical aid mission. Communication with patients, whether infected or only suspected, occurs through a fence, or with medical personnel in full protective gear. There is a concern with keeping patients who test positive for the Ebola virus within the compound, and in quarantine as prevention. There is also a legitimate concern about the security and safety of American aid workers. In February 2015, Red Cross workers were attacked in Guinea, and in August 2014 locals attacked a clinic and Ebola quarantine centre in the West Point neighbourhood of Liberia. Security here is contracted out to a local company, Intercon, as it is in many other US Embassy-managed medical sites. Security guards are local Liberian men, stationed approximately every thirty metres within the walls, who police who may enter and exit. The purpose of the razor-wire fence and other security practices are therefore multiple: to protect, to secure, and to quarantine.

These security practices are irreconcilable with the mission of medical humanitarianism, and yet increasingly they seem to be normalized in US Embassy-initiated responses to situations like the Ebola crisis. Yet, such securitization is not reflected in Médicines Sans Frontières units, or in other units run by nongovernmental organizations (image 9). This divergence raises important questions: What role do US state institutions have in providing humanitarian care and treatment, and what forms should US intervention take? Could the 403 million USD be spent more effectively, and more compassionately, by other agencies better suited to such urgent health crises? The history of the United States Public Health Service in global health research, which includes the Tuskegee Syphilis Study and the Sexually Transmitted Disease Inoculation Study in Guatemala, remind us again how critically important it is to address the complex ways in which states respond to humanitarian crises, including the allocation and distribution of economic aid.[note 10]

The site of the Monrovian Medical Unit is marked by a daily ritualized raising of the flags: one each for the United States, the United States Public Health Service, and Liberia (image 10). These are important symbolic geopolitical markers in contemporary global health, which not only announce the American response to Ebola as medical heroics, but also reflect a new politics of aid. The violent histories of colonization, slavery, and occupation are invoked by the obvious resemblances between the Liberian and American flags, recalling the not-so-distant colonial past and America’s role in colonizing Liberia with freed American slaves.

The US Department of Defense has published a series of online photo essays that highlight the ‘heroic efforts’ of troops dropping off aid, clearing field sites for aircrafts, and building temporary structures. Such images eclipse the everyday militarization of aid delivery and medical treatment. They also hide the more ominous content of such deliveries – like the body bags delivered by the Department of Defense from San Joaquin (image 11). Nor do they capture the everyday biotechnological materialities of medical humanitarianism. From within the wards, images capture the complexities of Ebola biosecurity (image 12), the internal safety measures for medical personnel (image 13), and the temporary nature of laboratory support in such short-term emergency contexts (image 14). By highlighting temporary structures, a lack of involvement of local community members or local military, and an emphasis on security over medicine or public health, the US military’s photo essays inadvertently show how such responses do not address the fundamental failures of global health initiatives.

As I have noted elsewhere (Elliott 2014), the US Embassy’s conflation of security and global health is not only problematic for the ways in which it reifies the disparities between those in the global South and the global North, but also because of the ways in which it contributes to the marginalization of local community members through cordons and segregation.

But admist all the suffering, photographs can also remind us of treatment victories (image 15) and other, nonmilitarized landscapes that seem to escape Ebola altogether (image 16). Hopeful images promise futures free from Ebola, razor-wire fences, and US occupation. Back in Canada, the border too is regulated and surveyed, as international arrivals are screened for visiting an Ebola-affected country or having contact with someone with Ebola, forcing us to understand the indeterminate effects not only of Ebola, but of the response to it, on lives everywhere (image 17). In the end we are left to reflect on the impossibility of trying to balance the safety and health of civilian personnel who have volunteered to work with those infected and affected by Ebola with a compassionate and effective response in the context of medical humanitarianism, one largely determined by a military ethic and American foreign politics. 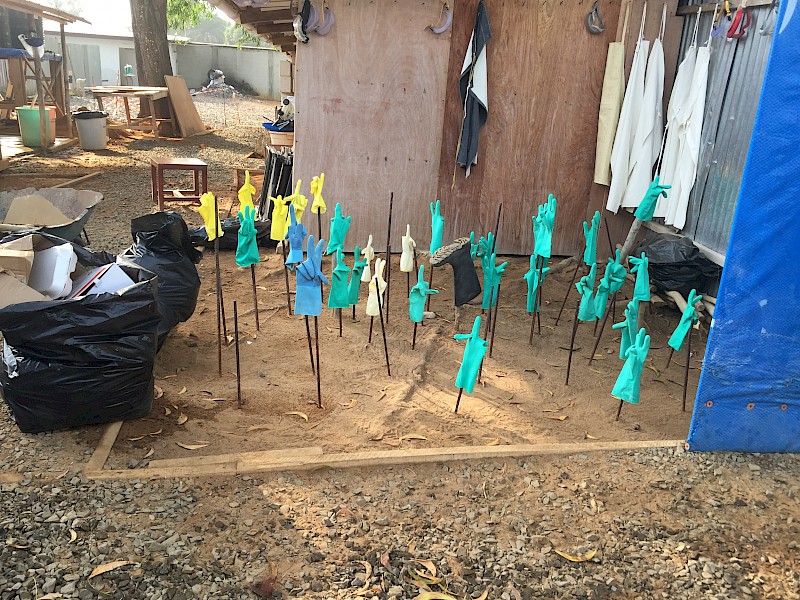 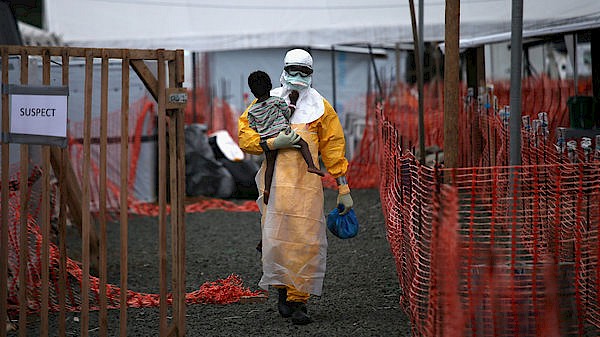 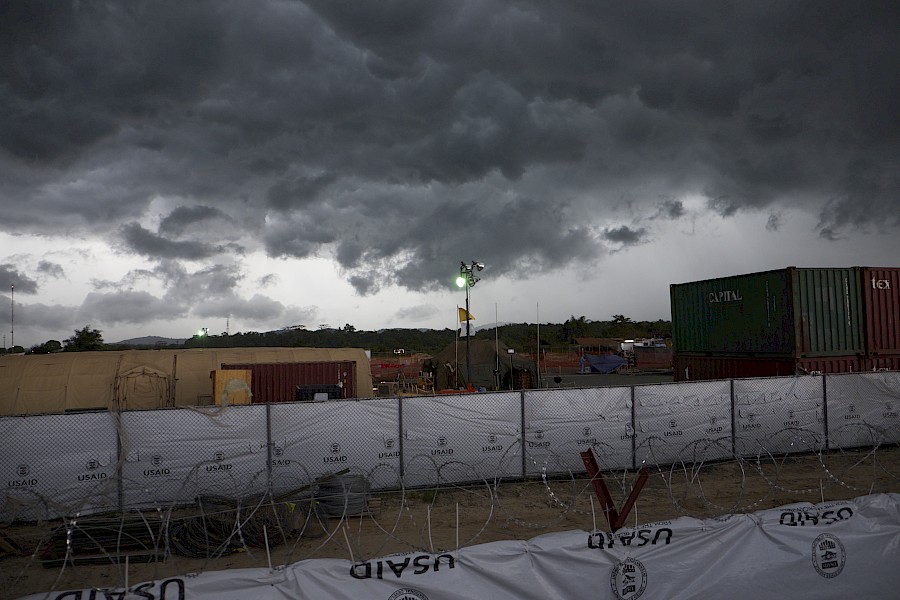 3. The view from within, Monrovian Medical Unit, Liberia 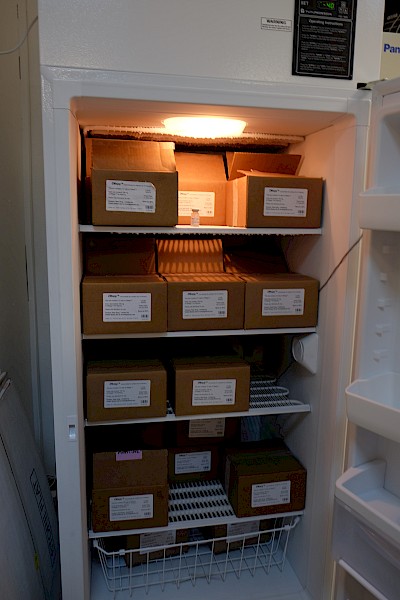 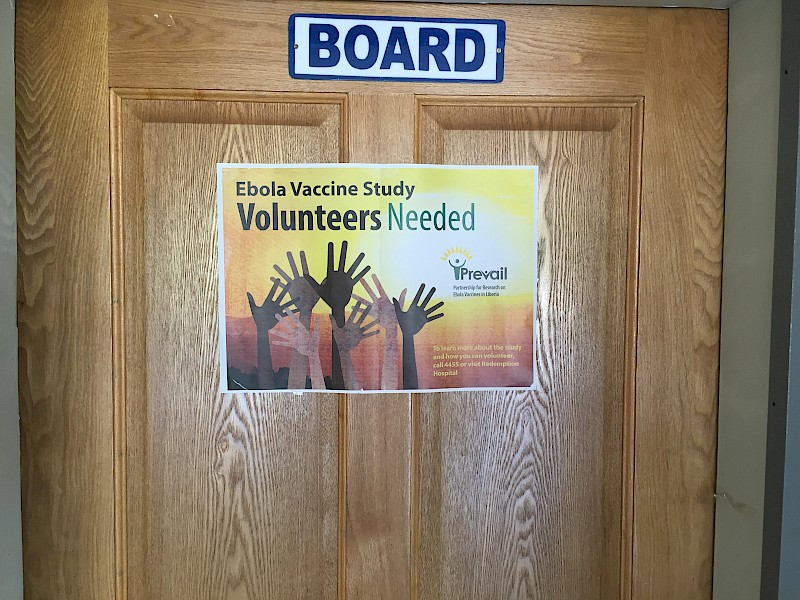 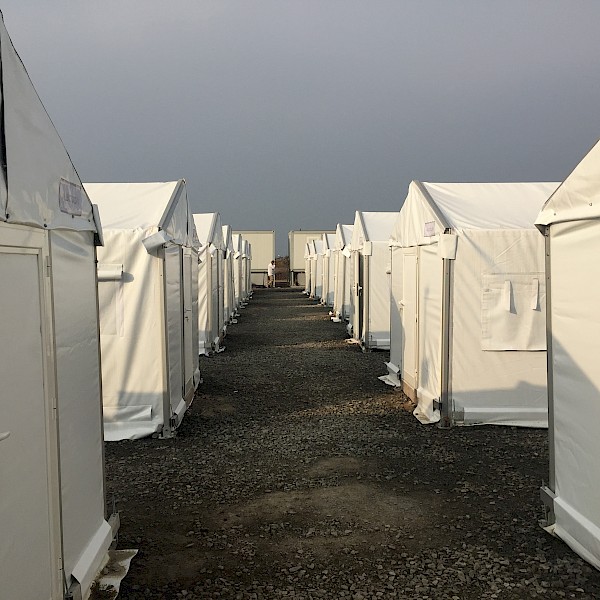 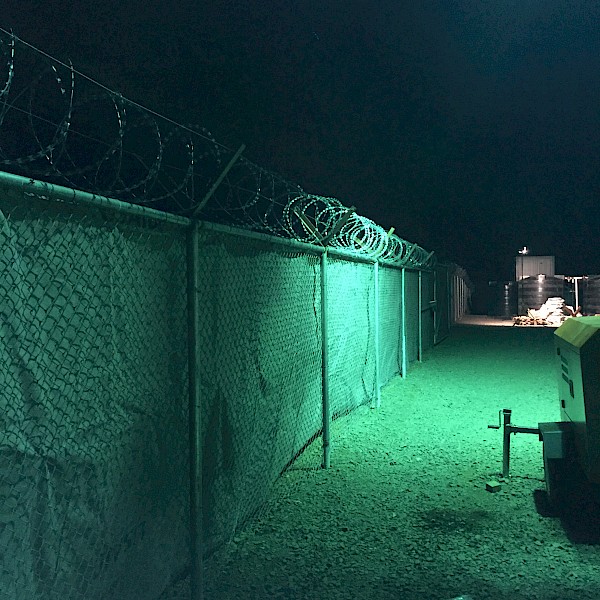 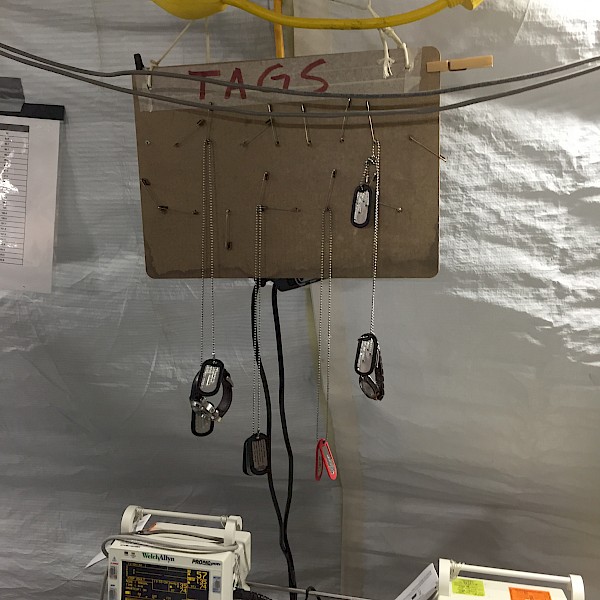 8. Dog tags hang while medical personnel tend to patients within the wards. 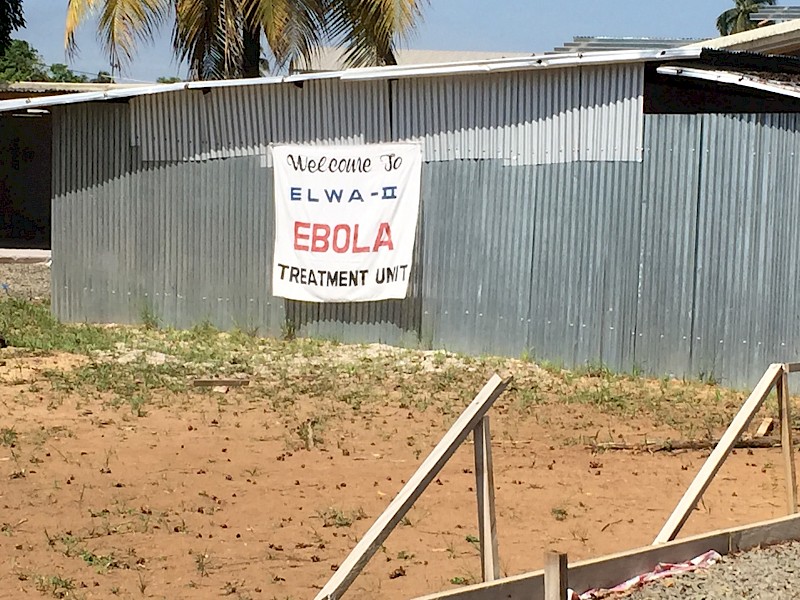 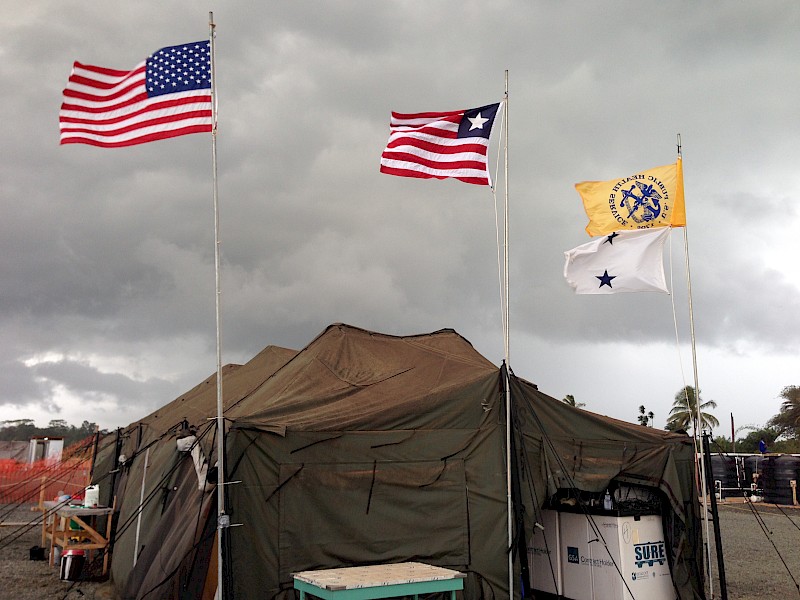 10. Geopolitics and the American flag 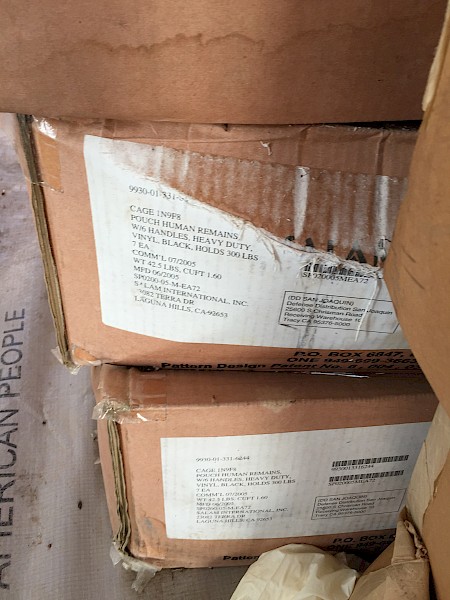 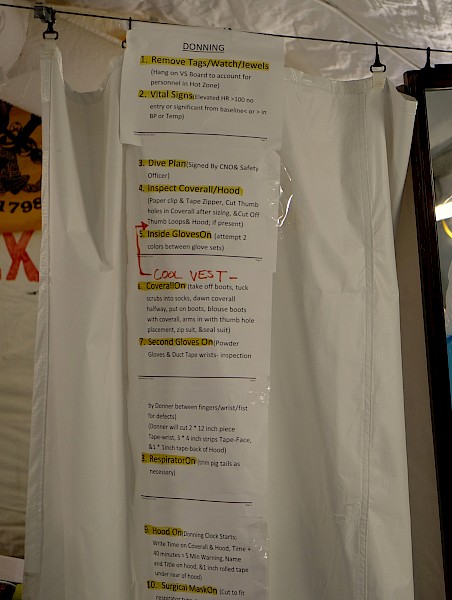 12. Donning: Biosecurity directions for getting dressed 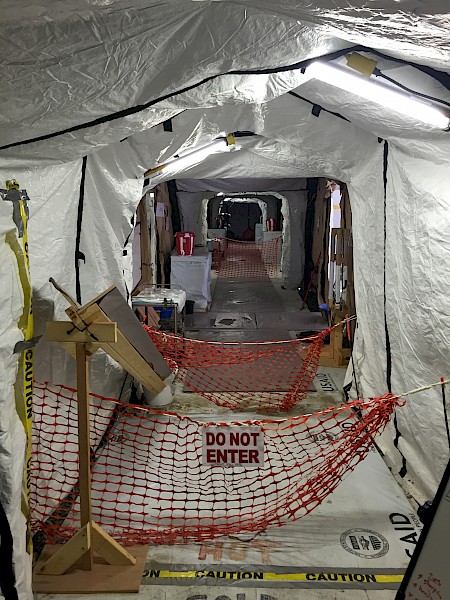 13. Safety zones within the MMU 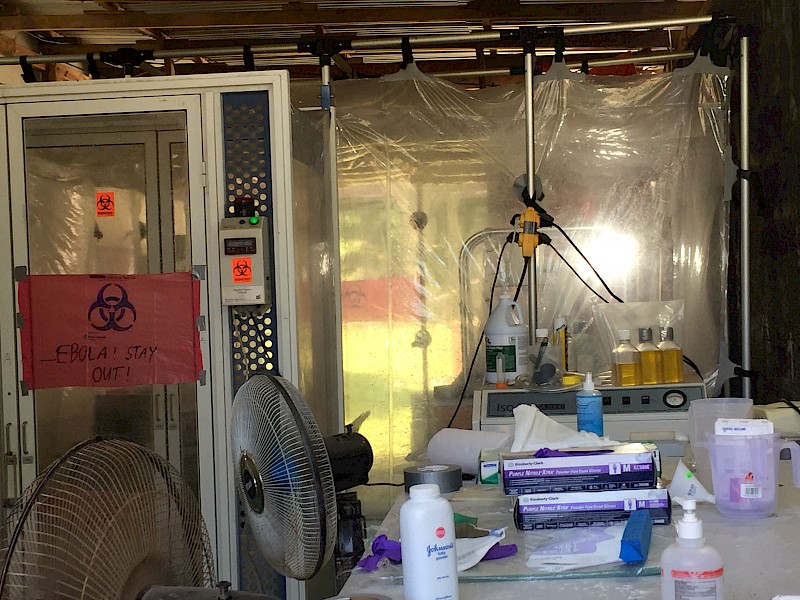 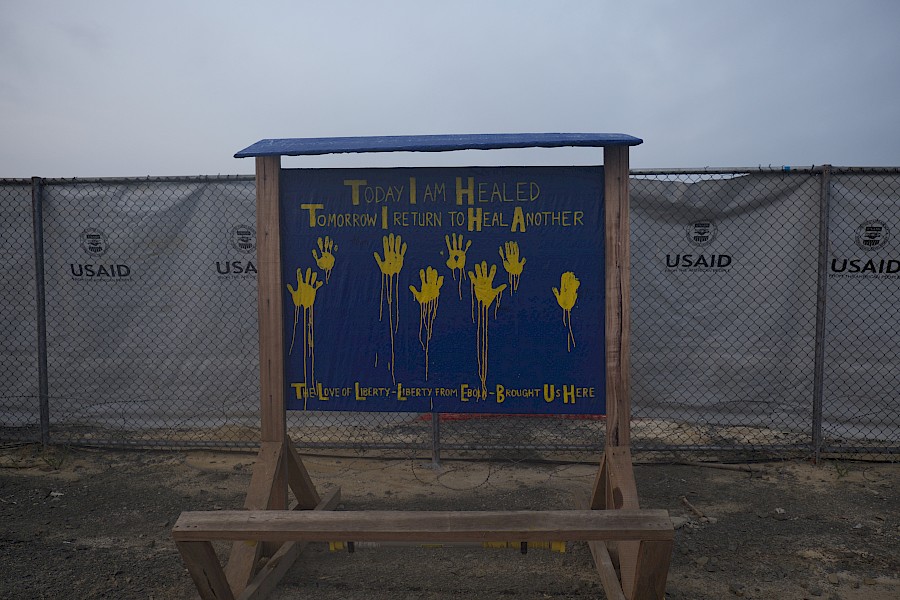 15. Today I Am Healed: Survivor board 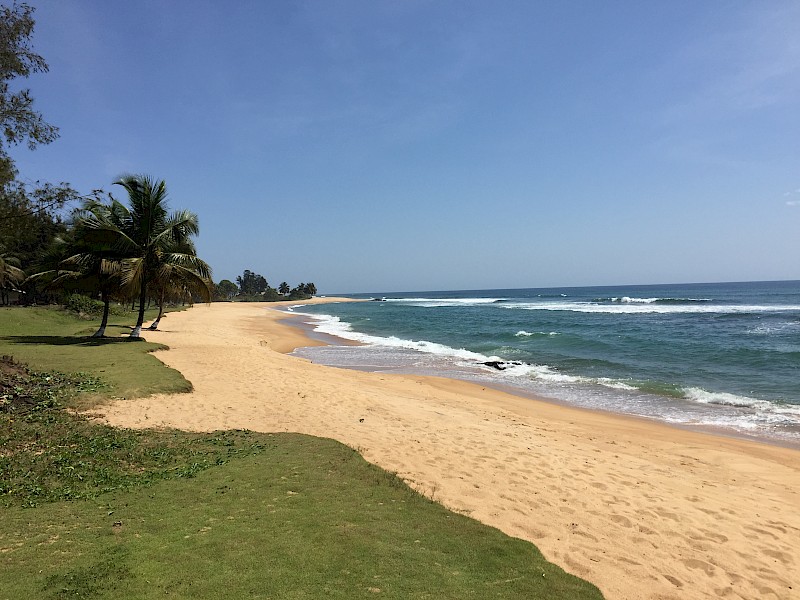 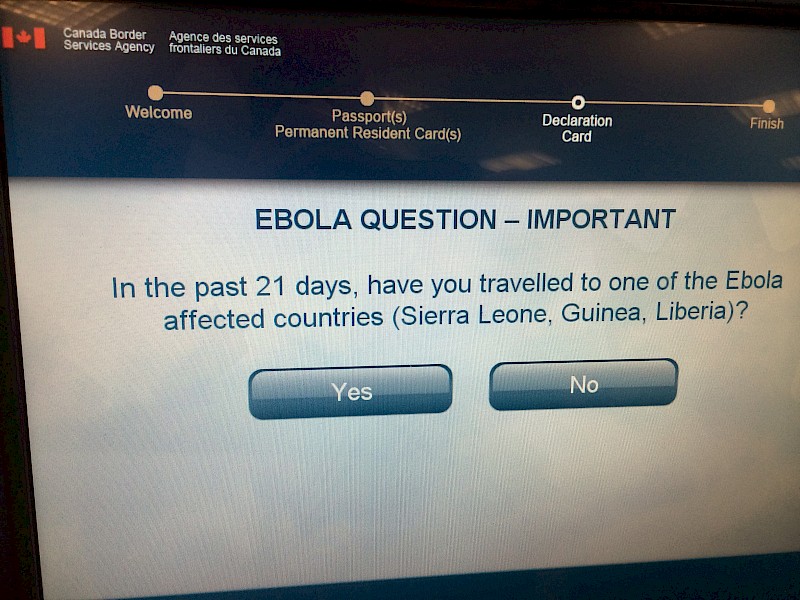 Resources on Ebola and the United States Public Health Service

Denielle Elliott is an Assistant Professor in the Department of Social Science at York University, with cross-appointments in the graduate programs of Anthropology, Development Studies, and Science and Technology Studies. She is a founder and co-curator of the Centre for Imaginative Ethnography, and writes on questions relating to postcolonial science, marginality, and experimental medicine.

Case count by the US Centers for Disease Control, http://www.cdc.gov/vhf/ebola/outbreaks/2014-west-africa/case-counts.html, accessed 30 March 2015.

Editors' note: On 9 May 2015, Liberia was pronounced free of Ebola by the World Health Organisation. For the WHO's statement on the end of the outbreak, see http://www.who.int/mediacentre/news/statements/2015/liberia-ends-ebola/en/.

ZMapp is considered a ‘triple monoclonal antibody cocktail’, as it includes three disease-fighting proteins that ideally target the Zaire ebolavirus.

See Susan Reverby’s (2012) work on the United States Public Health Service and both the Guatemala and Tuskegee studies.