— Reviewed by So Yeon Leem 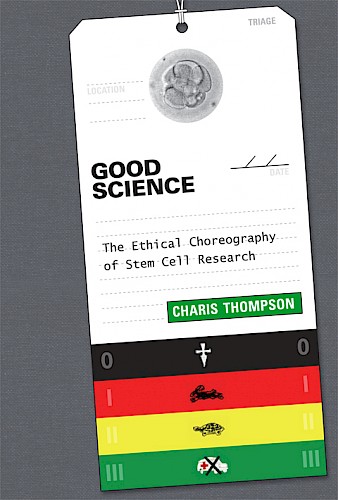 The theme of Charis Thompson’s newest book is ‘good science’, defined as science ‘with’ ethics. This is a timely and important theme in the present age of biomedicine, and the book will appeal to a broad range of science and technology studies (STS) scholars, especially those working on social, legal, and ethical dimensions of biomedical science and global health. The subject of Good Science is stem cell research, which has been one of the most intense battlefields of science and ethics, not only because it involves experimentation with human tissues, mainly ova and human embryos, but also because it is at the interface of public science and personalized medicine. This book clearly has ambitions beyond just describing the ethical, legal, and social implications (‘ELSI’, in the field of STS) of stem cell research; it aims to intervene in science (with ethics)-in-the-making. Thompson incisively challenges the notion that ethics either impedes or follows behind science. Rather, ethics are proactive to and constitutive of science; they are ‘at the heart of innovation itself’ (p. 221). The ‘ethical choreography’ of the book’s subtitle expresses the affirmative, productive role of ethics in scientific research and development.

Thompson is an established feminist STS scholar who has worked extensively on assisted reproductive technologies, and who has consistently used the term ‘choreography’ to highlight the coordination and co-construction of heterogeneous elements in biomedical practices. In her earlier research on infertility clinics, Thompson (2005) showed how women choreograph many different entities – their own body parts, such as ova, womb, and uterine tubes; nonhuman objects, such as probes, sonograms, or medical charts; and other human beings, such as medical practitioners, partners, and families – in order to have babies. In Good Science, Thompson expands the notion of choreography to ethics in frontier biomedicine, to go beyond ‘both the clean-up/catch-up model of ethics lagging behind science, and the simultaneous ethics and science ELSI model’ (p. 29). The ethical choreography of good science enacts and is enacted by multiple actors such as scientists, governments, taxpayers and patients, international research teams and regulatory organizations, human and nonhuman research subjects (human egg donors, animals, and synthetic biomaterials), and private sector actors. As in her previous work (Thompson 2005), in which she finds women’s agency not incompatible with medical objectification, Thompson once again argues that the relations of ethics and science are compatible and even co-constitutive rather than subsidiary, subordinate, or antagonistic.

Good Science draws on Thompson’s participatory fieldwork in governmental institutions, scientific laboratories, and universities in the United States, Singapore, and South Korea, countries that have extensive stem cell research programs. Thompson’s concern with ‘good science’ can be seen in her attention to transnational networks of stem cell research, particularly worldwide egg donation industries, and the global and local health disparities between different genders, races, classes, and locations that are maintained and reinforced in these industries. Considering this attention to power and inequality within global biomedical industries, this book can be read as ‘studying up’ in global health and medicine. More than four decades ago, Laura Nader (1972) urged anthropologists to study powerful groups, such as in businesses or bureaucracy, instead of marginalized people with less social and economic power. Good Science is an example of studying up in that it examines both hegemonic sites in global biomedical research and a hegemonic discipline – biomedical science – within global health care.

Good Science explores the new configuration of biopolitics, geographies, and ethics at ‘the end of the beginning of’ stem cell research in three parts: Stem Cell Biopolitics, Stem Cell Geopolitics, and Thinking of Other Lives. Thompson analyses the biomedicalization of global health centers around three ‘global actors’: patient groups, Asian nations, and biomaterials. Part I explains that human pluripotent stem cell research in the United States has been framed within a ‘pro-curial’ (searching for a cure) rhetoric of innovation, in which both biopolitics and necropolitics are implicit and public science and personalized medicine are mixed. Sacrificing unborn lives and potentially jeopardizing egg donors’ health are necessary to this type of public science, which promises to save lives through personalized medicine in the future. Pro-curial bioscapes demand a new market, a new public, and new ethics as they cross the boundaries between life and death, private and public, and bench and bedside. This part of the book points out new subjects, particularly patient advocates, who act outside of the principles of state government and mainstream market.

In Part II, Thompson describes the national and international politics of stem cell research. Chapter 4 focuses on an increasing role that biomedicine plays in rebuilding the state economy in Singapore and South Korea, both of which used to be called ‘Asian tigers’ until the early 1990s and went through national economic crises in the late 1990s. Thompson shows how new biomedical research can be used as a pro-cure for national economies in these Asian countries affected by global inequalities in industrialization. She further complicates the interplay between the global and the local or the West and the East: Singaporean and South Korean stem cell research teams consisted of a multinational assemblage of scientists and sponsors, ethical regulations became internationally standardized, and stem cell therapies were associated with medical tourism beyond national borders. Along with horizontal flexibility and mobility in global stem cell industries, the author also finds the stem cell world ‘recalcitrant [and] vertically stratified’ in terms of ‘transnational and domestic labor (including scientific labor) and tissue markets, as well as radical differences in access, affordability, and health outcomes’ (p. 147).

In Part III, Thompson suggests innovative and provocative ethical models for dealing with both human and nonhuman research subjects, especially pursuing ‘in-kind reciprocity’ between one who donates part of one’s body for public science and one who receives benefits from personalized medicine. She suggests a model that will ‘incentivize, empower, recompense, and/or protect donors in ways that were explicitly indexed to the use to which their tissue was being put’ (p. 186). This could be achieved by financial compensation for tissue donations as well as the removal of donors’ anonymity. Instead of substituting animals for humans, she also proposes to, ‘in a concerted international effort … build in vivo-ized in vitro systems with the express purpose of serving as robust models for research and testing’ (p. 190). For instance, bioengineering makes synthetic tissues and organ models, biophysics visualizes organic dynamics, and molecular and cell biology define transcription factors in differential gene expression and cell migration/division/determination. Here, the third global actor appears: biomaterials both drawn from human bodies and created by science and technology. New nonhuman materials call for a legitimate place in the market, law, and science.

The focus and voice of this book are ‘pro-curial’ in a double sense, and thus can be controversial: in my reading, this book itself is a proactive search for an ethical cure for science (and a scientific cure for ethics, too), an effort that I support. But others may find the book too ‘pro-curial’ in the sense of overly favoring biomedical cures. And while Thompson defines ethics quite broadly, as ‘an overarching normative term … ranging in its application from political contests over funding, rhetoric, and institution-building to matters of personal belief and normative arguments made by scholars and activists hailing from a range of disciplines and social locations’ (p. 26), her actual description of ethics seems rather narrowed down to research ethics and also tends to be prescriptive, as she identifies herself as ‘a passionate advocate for … the best science and the best ethical practice’ (p. 64). Thompson’s vision of good science involves primarily governmental and corporate sectors, scientific laboratories, and research materials. This upstream, regulatory, and scientific vision of ethics is certainly useful to understand and further intervene in the globalization and biomedicalization of contemporary medicine, but it risks being too upward, normative, and pro-science. Beyond this concern, the book is worth reading for a rather simple reason. If one considers this book ‘studying up’ global health and medicine, it provides fascinating insights into how global biomedicine is being shaped at its elite frontiers. Good Science is itself a provocative choreography of medical anthropology, STS, and global health.

So Yeon Leem is a postdoctoral fellow at the Collège d’études mondiales, Maison des Sciences de l’Homme, France. Previously, she worked at the Science Culture Research Center in South Korea and continued her research at the London School of Economics. Her research has focused on feminist critiques of stem cell research in South Korea, visualization technologies in the field of plastic surgery, feminist STS theories, and ethnographic methods, with publications both solely and jointly authored in East Asian Science, Technology, and Society: An International Journal as well as several Korean journals of anthropology and STS. Currently, she is developing her ethnographic study of plastic surgery in South Korea within global contexts.