An anthropology of lying

Information in the doctor-patient relationship 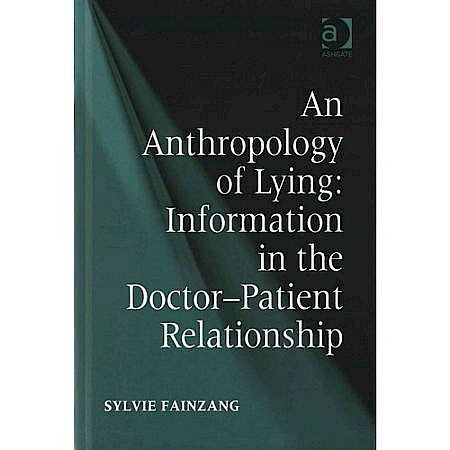 Everybody lies, on certain occasions, in certain situations. Someone who claims that they never lie either proves that they are a liar or gravely naïve. A situation where lying is common is the encounter between doctors and patients. That, in short, is the topic of Sylvie Fainzang’s An Anthropology of Lying: Information in The Doctor-Patient Relationship (2015). That doctors and patients often lie to one another is, on the one hand, not so surprising; the seriousness of a disease and the hierarchical distance between doctor and patient make lying unavoidable. On the other hand, conveying correct information to one another is crucial for giving and obtaining optimal treatment. So, what makes doctors and patients tell lies, in spite of the harmful medical consequences that may result from concealing or twisting information?

The author conducted anthropological research among roughly eighty patients (sixty of them with cancer) and twenty doctors. The patients were approached at various stages of their disease. She also attended consultations – compelled to be dressed in a white coat (another type of ‘lying’) – to observe communication and interaction between the two parties. When possible, she met doctors and patients separately afterwards to reflect on what had happened during the consultation.

The book, which is a translation of the French original (2006), looks first at doctors and then at patients. Chapter 3 focuses on the numerous misunderstandings between doctors and patients. Throughout the book, lying is perceived and analysed in the context of communication – exchange of information – between patients and doctors. Lying is an emblematic feature of this problematic relationship, which gives the reader a rich insight into the contradictory – but socially logical – processes taking place in diagnostic and therapeutic encounters.

The aim of Chapter 1, on doctors, is to ‘to find out what they say, what type of things they reveal and do not reveal, to whom and under what conditions’ (p. 21). Most doctors in the research emphasised that not everything should be revealed to a patient. Reasons for not informing a patient included the fact that a patient did not ask for information and the doctor’s own uncertainty. Some referred to the Hippocratic Oath, which states that no harm should be done to a patient, which they interpreted as an instruction not to upset a patient with bad news. Empathy could cause a doctor to be (too) soft with a patient and wrap the truth in comforting euphemisms and misleading jargon to the point of lying. Others argued that the right of patients to know the truth exists alongside the right not to know. Still others emphasised that the truth should always be told to patients because dissimulation makes them suffer. Fainzang shows that the same argument (the ‘benefit of the patient’) is used to justify completely opposite behaviours by doctors, which underlines the arbitrariness of ethical postures.

The belief that a patient will not be able to understand the medical truth about his condition is another reason for doctors to withhold information. The author concludes, however, that doctors’ assumptions about the inability of patients to understand is largely based on patients’ sociocultural backgrounds. Doctors may justify their decision on psychological grounds, but the real ground is social. Compounding social inequality in terms of patient access to health care, Fainzang remarks, is a social inequality in their access to information (p. 42).

For some doctors, ‘lying’ is perhaps too harsh a term for what takes place, though they readily use the term among themselves (as the medical literature shows). Many doctors deny that they tell lies, though they often let the patient believe what they know to be untrue. Some say they may have done so in the past but do not do so anymore; though they prove and sometimes openly claim that they are lying by saying to a patient, for instance, that he has to be operated for a polyp when in fact he has cancer. Today, these doctors claim, all deceptive practices have disappeared, but the author shows that subtle forms of deception are still common. In the concluding section of Chapter 1, she quotes various authors who confirm this observation. Lies are indispensable for the maintenance of social order, including workable relationships between doctors and patients. But these lies are not experienced as lies by doctors; they withhold, parcel out, or euphemise information for the well-being of the patient in the same way that people in ordinary life manipulate self-presentation to maintain good relationships with their environment. A quote to illustrate euphemisms in action:

Mrs C has incurable liver cancer and her life expectancy is very short. The doctor told her they needed a ‘therapeutic break’, meaning that in reality the treatment had failed and it had to be stopped: “We have abandoned any ambition of finding a cure. In fact, we have given up, but I prefer to tell her we are taking a break” (p. 60).

Chapter 2 focuses on patients and presents the mirror image of the preceding chapter about doctors. Some patients do not dare to ask for information for fear of disturbing the doctor or being treated with contempt, preferring to ask information of the general practitioner to whom they feel closer. The awareness that precious time is passing without getting any information is a major source of anxiety for patients. ‘Doctors are a race of mutes’, a teacher complained, ‘It took me six days to make my surgeon talk, (p. 73). Many patients cannot accept that a doctor does not know or is uncertain, and thus suspect that a doctor may be hiding bad news if only vague and elusive information is provided.

Relatives and others around the patient complicate this situation of mistrust. Doctors may decide to be more open to relatives than to the patient; relatives may insist that the truth is not told to the patient at all; and – vice-versa – the patient may forbid the doctor to reveal the truth to the relatives. All ‘computations’ have their specific reasons and social contexts.

But patients also lie; they let doctors believe what they know to be untrue. They lie about their non-adherence to the treatment regime, about symptoms and the pain they feel, and about relevant but private details of their personal life that they do not want to share for fear that the doctor will reveal them to relatives or others. The author shows that doctors lie more often to people with a lower social status and that – conversely – patients with a lower status lie more often to doctors. It is striking, however, that less than five pages are devoted to patients’ own lies; almost the entire chapter is about patients’ reactions to doctors’ lies. This reader wonders if not more could be said about lying patients and their agency in lying.

The author’s conclusion to the chapter is that ‘doctors generally lie for the benefit of their patients – at least explicitly – while patients lie for their own benefit’ (p. 104). But are doctors not lying for their own benefit (convenience) as well: to avoid being disturbed by unwelcome questions or claims, for example, or to dissimulate experimental and academic intentions in pursuing a certain treatment?

In the final chapter, the author discusses multiple misunderstandings between doctors and patients that lead to what I would call ‘unintended lies’ or ‘lies by accident’. Information is confusing because it is misunderstood. Patients and doctors live in different social and cultural worlds with different values and languages, resulting in what the author calls ‘cognitive dissonance’.

This study offers a fascinating and enlightening picture of the complex issue of information exchange between doctors and patients and of the role of lies therein. Not only social science colleagues should read this; doctors too will find a lot of ‘information’ in it to chew on. Life is an amalgam of lies and truths. It is the task of researchers to make sense of this amalgam and write about it. Sylvie Fainzang did, in the lion’s den, with great insight and understanding.

Sjaak van der Geest is Professor Emeritus of Medical Anthropology at the University of Amsterdam, the Netherlands. He did fieldwork in Ghana and Cameroon and published on a wide range of topics, including perceptions and practices concerning birth control, witchcraft beliefs, Ghanaian Highlife songs, missionaries and anthropologists, anthropology of the night, and various topics in medical anthropology, in particular the cultural context of Western pharmaceuticals in non-Western communities, hospital ethnography, perceptions of sanitation and waste management, and social and cultural meanings of growing old. Personal website: www.sjaakvandergeest.nl.