Cultural entropy and the unraveling of AIDS media campaigns 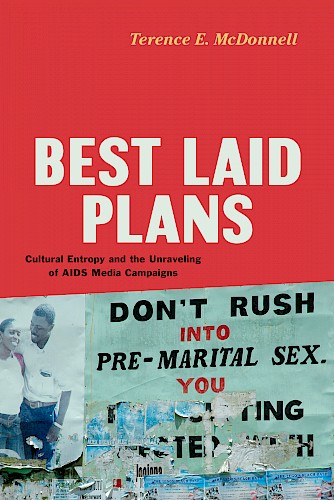 Why do meticulously prepared, carefully researched health messages targeting a public eager for reliable information about HIV/AIDS fail to transmit their intended prevention message? In a volatile and sensitive process like the transmission of information about safer sex, to what extent can design account for interpretation? How do designers of prevention materials anticipate and counter tendencies towards plural and divergent interpretations?

In Best Laid Plans, Terence McDonnell draws upon ethnographic fieldwork in Ghana to argue that public health practitioners, media designers, and social scientists alike have been too dependent on one model of communication to analyse the circulation and reception of public health messages: a model based on semiology. Each of these disciplines roughly shares vocabulary for describing how meanings multiply and diverge when messages move between those who design them and audiences. Designers of public health images are closely attentive to the ‘symbol-cognition link’, which McDonnell defines as the ‘alignment between a campaign’s symbolic content and an audience’s cultural knowledge and cognitive presuppositions’ (p. 34). Such designers direct their energies towards mitigating meaning loss by matching messages with what is understood to be the audience’s cultural expectations. McDonnell argues that this joining of messages and expectations is but one link in the ‘interpretative arrangement’ within which public health imagery and prevention materials become part of broader visual cultures and worlds that are full of practice, intention, and material manipulation. Best Laid Plans examines the research, creation, and public afterlives of health communication materials, following materials created under minutely controlled circumstances as they are pressed into service in a range of epistemic, medical, moral, material, and communicative projects.

In Accra, McDonnell discovered that women were taking free female condoms distributed at clinics, boiling them down, and then selling them in the market as bright and eye-catching rubber bracelets. From this epigrammatic sketch, a story that could be interpreted as evidence of the pervasive chaos of public health communication and its tendency to veer away from the strict frames imposed by planners, McConnell builds another, more generative narrative. Condom bracelets, he argues, require an entirely new theory of health communication. McDonnell suggests that to understand condom bracelets we need to analyse them as part of a process he calls cultural entropy, ‘the process through which the intended meanings and uses of a cultural object fracture into alternative meanings, new practices, failed interactions, and blatant disregard’ (p. 29). Cultural entropy is a process in time, not a journey towards indeterminacy or meaninglessness, but an ‘unfolding ontology’ of objects (p. 34). The multiple translations and material transformations involved in health communication, McDonnell suggests, push us beyond our contemporary conceptual reflex, inherited from science and technology studies, towards seeing objects as coalitions and accomplishments of stability – however tenuous and fragile – and towards accounts that emphasize ‘materiality, interaction, contingency, dynamism, and flow’ (p. 16).

Chapter 2 maps the ‘cultural topography’ of Accra, an ‘entropic terrain’ (p. 61) in which nonofficial and nonbiomedical messages about health borrow from the vocabularies and aesthetics of biomedicine. In chapters 3 and 4, McDonnell takes us into the world of the people who research, design, and retool HIV/AIDS information materials. These designers are under pressure to ‘move indicators’, to demonstrate that people exposed to their communications change behaviours as a result. To do this, designers draw upon best-practice guidelines in health communication. Designed to minimise error and drift of meaning, and to maximise local cultural acceptability, McDonnell observes that these guidelines are in practice taken as ‘hard and fast rules’ (p. 69), creating ‘opportunity for cultural entropy’ (p. 64). Despite the measures taken to avoid meaning loss, he argues that entropy is seeded into communication objects at the design phase.

Chapter 5 takes up the story of the materials in public space, examining the ‘material qualities of the interpretative arrangements’, material (dis)placements in space and time that fray the materials and distort or dilute their intended message. McDonnell stresses two factors that were invisible or disregarded at the design stage: the physical environment the images are nested within and the cultural practices people enact in their vicinity (p. 121). The billboard, the visual technology most favoured by designers, is a notable site of entropy. When billboards became tattered and weathered, people in Accra respond to them negatively and express frustration that the organisation whose logo is prominently displayed on a poster has ‘abandoned them’ (p. 124). In placing the billboards for maximum exposure, certain aspects of the ‘material character of the interpretative interaction’ become overlooked (p. 128). When positioning images at sites of high-density traffic, for example, designers tended to think about the sightline of people in private cars, not the lowered or obstructed vision of passengers passing in crowded public transport.

Chapter 6 is a riveting and troubling examination of Ghanaian memories of the first generation of ‘negative’ AIDS posters: the frightening advertising campaign ‘Stop AIDS Love Life’ that identified HIV as a ‘menace’ and emphasised the emaciated and suffering bodies of patients. McDonnell’s interviews with designers demonstrated how eager they were to move away from these tactics and produce ‘positive’, life-affirming and nonstigmatising images in line with best practice guidelines. However, when McDonnell asked Ghanaian focus group participants to create their own AIDS posters, they uniformly drew upon the older, negative images of death, illness, and dying – including the skull and crossbones and the coffin – and not the repertoire of more positive images. The negative images had proved remarkably resistant to entropy, such that the ‘stability and cognitive centrality of early campaign images led to the cultural entropy of these later campaigns’ (p. 186).

Two decades of ‘positive’ health communication seem to have failed to displace older, negative campaigns. The book presents many explanations for this, including the rigid ‘cage’ of best practices; the conservative pressures exerted by ‘cultural ombudsmen’ (p. 107), the religious and traditional leaders, governmental officials, and representatives of Ghanaian civil society brought in to consult on the images; formative research techniques that simplify ‘culture’ and see communication as compensating for a deficit of information; the fetishisation of the design process; and lack of follow-up and attention to what happens to health promotion materials when they are placed in a complex urban environment.

Building on this lucid analysis of the design process, how can we apply this insight that HIV/AIDS campaigns are vulnerable to cultural entropy? McDonnell’s advice for public health practitioners is rooted in his premise that communication is chaotic and entropic. Rather than hierarchical, conservative, single-issue campaigns, created by committee and flattened by consensus, McDonnell calls for multiple, experimental, and open-ended campaigns that are not overly constrained by concerns about ‘acceptability’, are rolled out quickly, and tested in situfor potential entropy.

The tight focus of the book on unwinding cultural entropy leaves little room for a sense of how visual and material objects provide grist for cultural communication and contestation on an everyday level. For instance, cultural entropy here does not account for how health communication might produce stigma or problematic behaviour, nor does it help to address the ethics of health communication more broadly. There is plenty of evidence that building health campaigns around vulnerable aspects of identity is a highly effective communication strategy. For example, McDonnell notes that in Ghana, the social marketing of condoms around male anxieties about sexual performance was extremely successful. Bodies are notable sites of collisions and conflicts between matters and meanings; health campaigns that trade on concern about the social status of the body often in turn succeed in changing behaviour (moving those all-important indicators), but at what cost?

For social scientists researching public health, the book provides a wonderful example of how to analyse a professional culture critically, sympathetically, and productively. In an environment dominated by reductive models for appraising and capturing ‘culture’, McDonnell gives us an analytical framework for understanding cultural communication with real explanatory power.

Branwyn Poleykett is a postdoctoral research associate at the Centre for Research in Arts, Social Sciences and Humanities at the University of Cambridge. She is currently preparing a book manuscript on health communication in Dakar.