Saharan Africa is faced with a significant and increasing burden of noncommunicable diseases, including type 2 diabetes mellitus. The incidence of diabetes is growing; however, insufficient resources are available for prevention efforts and disease management. Diabetes affects people living with the disease, their families and communities, and the multiple health care systems with which they interface.

The prevention and management of diabetes extend well beyond the walls of health care facilities; they are embedded within and influenced by family, community, cultural, and economic contexts. Adopting a socioecological lens (Hill et al. 2013), we use photography to explore diabetes-related behaviors such as diet and physical activity in the context of family, community, and other emplaced interactions. Our images make visible the management and effects of diabetes within the intimate daily lives and spaces of people living with the disease in the Thiès region of Senegal.

Photography as a tool of ethnographic research can exacerbate power differentials between observer and observed, particularly when used with vulnerable populations. However, the creation and dissemination of images also provide an opportunity to make visible a noncommunicable disease like diabetes, which continues to be dangerously underfunded internationally (Bloomberg 2017). Diabetes in sub-Saharan Africa, in particular, remains insufficiently researched and scarcely represented, rendering invisible both the people (patients and health care providers) and places involved in the prevention and management of the disease.

All photographs were taken in 2016 in several communities in the Thiès region of Senegal, including the coastal city of MBour and the village of Thiadiaye. They were created during repeated visits to the various places where diabetes is managed, including community health screenings throughout Thiès, a diabetes clinic and a hospital emergency room in Mbour, a market in Thiadiaye, and multiple participants’ residences. Research activities were undertaken through a partnership with Wėer Africa-Diabetes, which is a large, Senegalese-run nonprofit and grassroots initiative that raises awareness and provides programs to prevent and treat diabetes and other chronic conditions in West Africa (Wėer means ‘healthy’ in Wolof, a local Senegalese language). All participants provided verbal and written consent to be photographed.

The cost of health

The daily management of diabetes requires the negotiation of food intake and physical activity levels. Individuals must traverse various public and private spaces, including health care settings, places where food is bought and consumed, and places where exercise is undertaken.

Acquiring resources for the purchase of healthy food and medicine is one of the most challenging, ongoing aspects of diabetes management in the Thiès region of Senegal.

Awa [note 1] was unmarried and lived with her sister and niece in Thiaydiaye, a semirural village with limited industry and opportunities for employment. When we arrived at her home, she was preparing to eat breakfast and take her insulin (photograph 1). She was only able to afford a small piece of French bread, which is not an ideal breakfast for a person living with diabetes. She told us that obtaining medication on a monthly basis was also a struggle. She relied on family members to pay for her medication and all of her medical care, as she was unemployed. 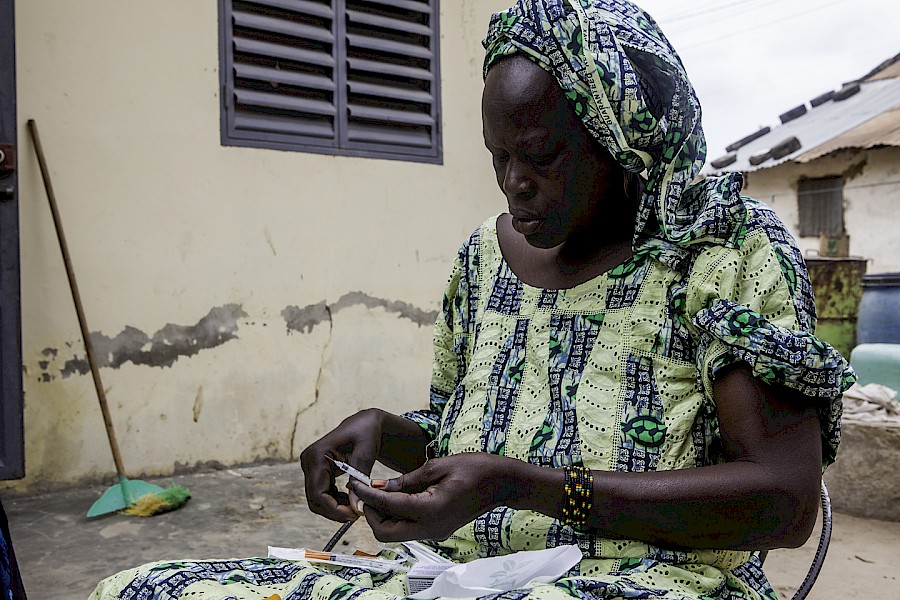 In Senegal, people living with diabetes are generally advised to consume a diet consisting primarily of fruits and vegetables and lean meat and fish. In contrast, traditional meals are largely rice-based, with a small amount of protein and fruits and vegetables incorporated into side dishes. For example, the national dish is a fish and rice dish called ‘Thieboudienne’.Because of the starch content of rice, people living with diabetes are advised to eat this dish only in small amounts.

In addition to the prohibitive costs of a diet of fruits and vegetables and lean meat and fish, eating a diet that differs from that of family and community members can cause feelings of separation from family, community, and traditions. Tonton lived with his wife and ran a small shop attached to his house. His family and friends visited him daily. Tonton was very conscientious about adhering to the recommended diabetic diet. However, like other individuals with whom we interacted, Tonton expressed the feelings of isolation that arise when one eats a diet that is different from the rest of one’s family. In Senegal, meals are typically served on a communal, family plate. Tonton, however, eats his specially prepared dinner alone (photograph 2). 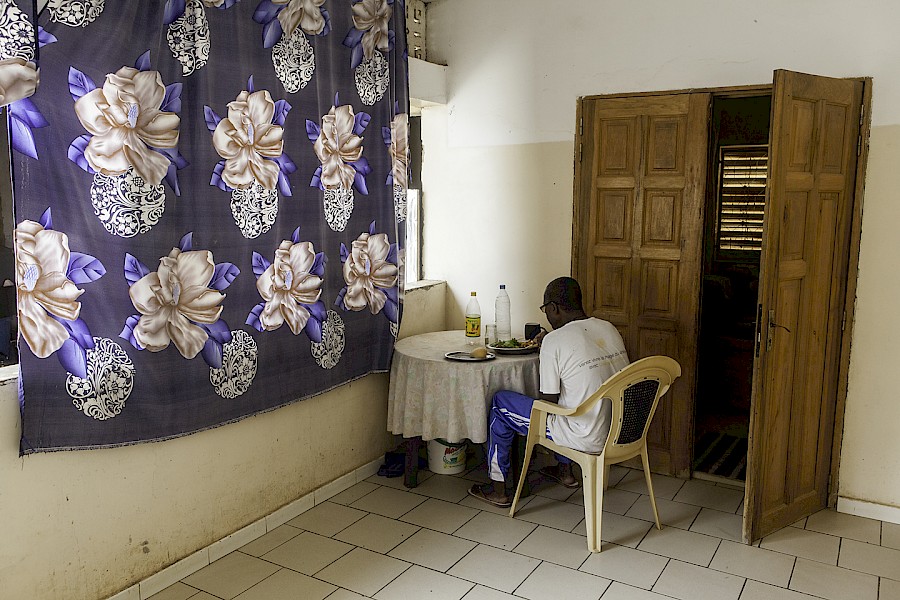 Accessing health care regularly is also an important part of managing diabetes. MBour Hospital employed a doctor and nursing staff trained in and dedicated to the care of patients with diabetes. Even with diabetes-focused care available, however, access could remain elusive. In Senegal, only a small percentage of the population has any form of health insurance, and most people must pay for care out of pocket.

As a nurse in the diabetes clinic at MBour Hospital dressed the wound of a patient who had his big toe amputated due to complications from diabetes (photograph 3), the patient explained to us that he worked as a truck driver to support his wife and children, but had to stop work due to the surgery and recovery time. During the visit, his diabetes doctor informed him that it could take six to eight months for him to fully recover (and, by association, to again be able to provide for his family). As we were chatting with him and taking his photo, he told us that he often missed regular blood tests of his glucose levels and routine medical appointments, and had not been taking prescribed medicines due to the costs involved. 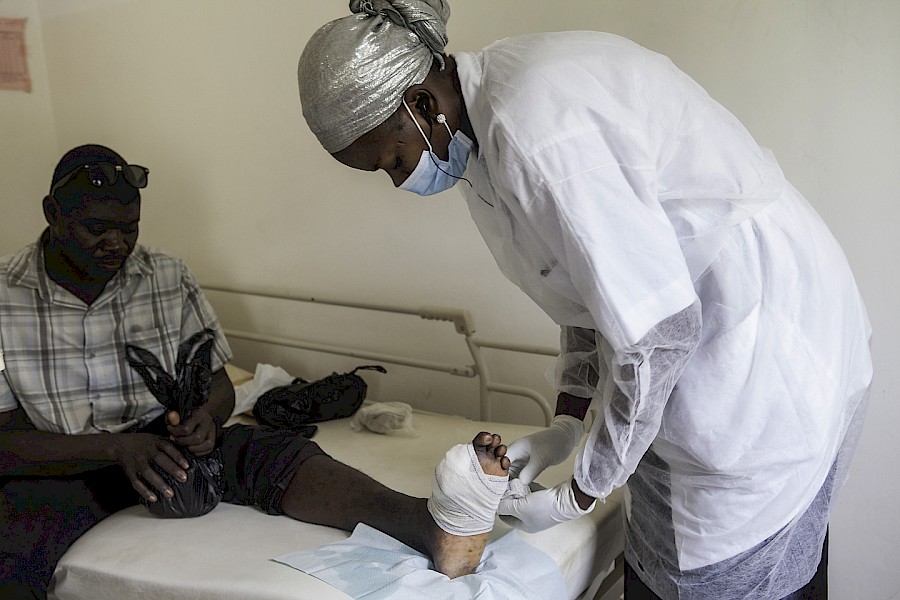 3. MBour, Senegal: Impact of diabetes on patients and families

At the same time as healthy foods and medicines are often too expensive for those living with diabetes, local markets in Senegal increasingly stock cheaper processed and high-sugar foods (photograph 4). This shifting dietary landscape and the growing popularity of processed foods make choosing healthy food harder for people living with diabetes, even when they are able to afford healthier options. 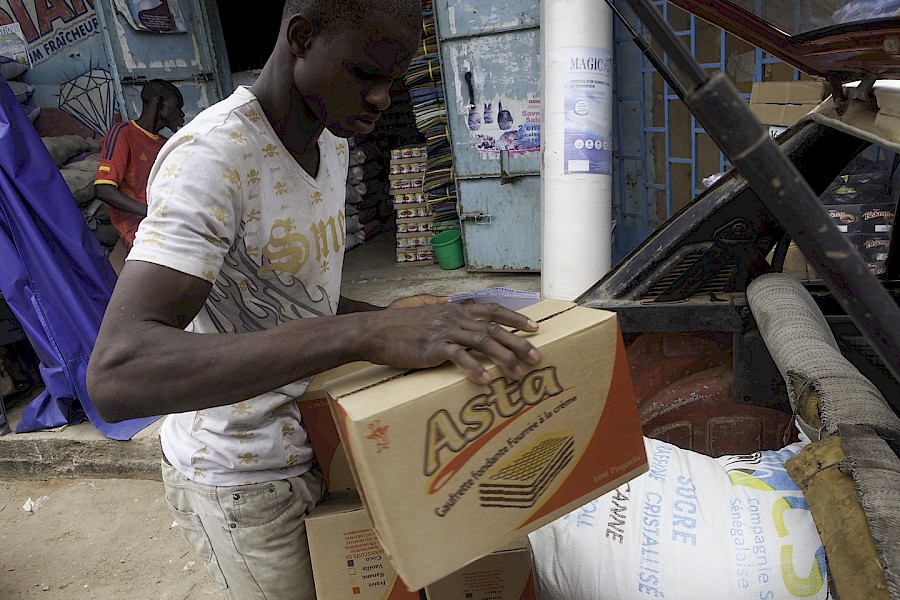 People with limited resources are able to create solutions to the challenges of living with diabetes through exercise and movement. One participant used his home’s rooftop to perform daily calisthenics, running, and stretching exercises (photograph 5). As a sixty-four-year old retiree with a modest pension and large family to support, he was unable to afford diabetes medicine or pay for regular blood sugar tests. However, regular exercise along with dietary changes resulted in notable improvements in his health and better blood sugar levels. He told us that ‘you can do sports anywhere. I don’t have any money, but I have to exercise to control my diabetes’. 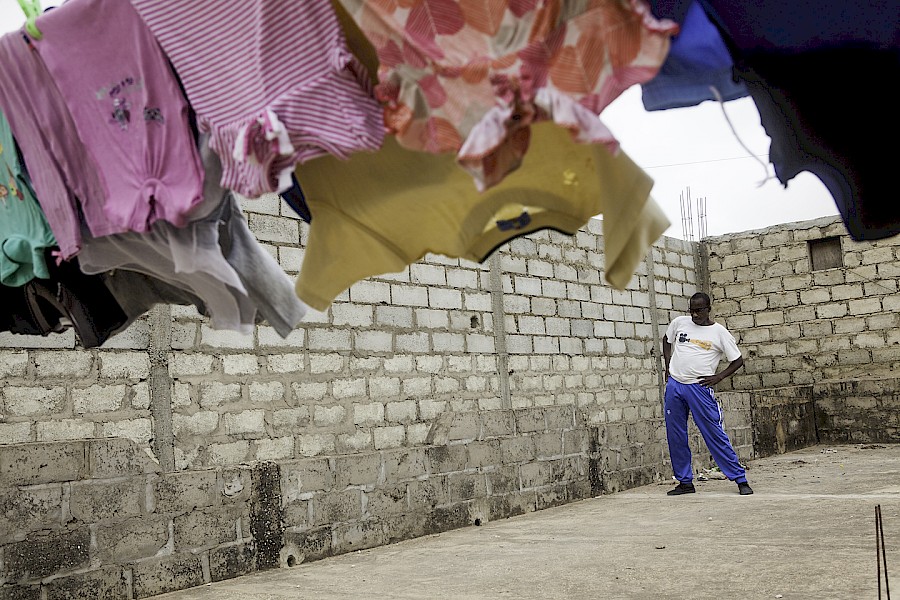 Other solutions have arisen in response to the diabetes epidemic in Senegal. At the grassroots level, local health care providers have begun to offer community-based consultations to identify potential cases of diabetes and hypertension. At these screenings, Senegalese doctors and medical students test blood sugar levels and blood pressure (photograph 6), deliver education, and follow up with participants who have already been identified as having high blood sugar or blood pressure. We observed that many younger community members wanted to get their blood sugar and pressure taken because they had family members who were struggling with diabetes and did not want to share the same fate. Health care professionals worked in conjunction with the local community to organize these screenings. 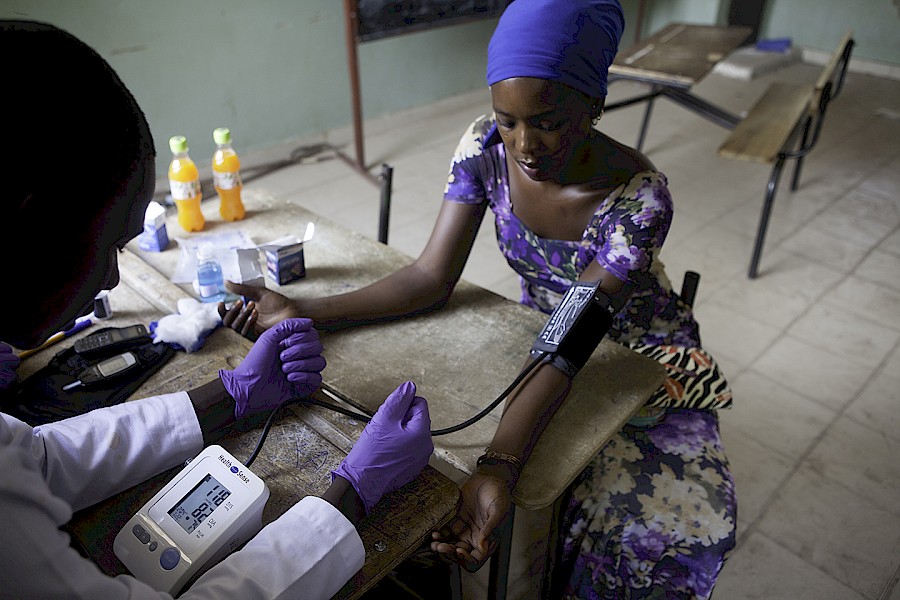 Finally, medical pluralism is not uncommon in Senegal. Traditional healers and local entrepreneurs are increasingly creating businesses that offer herbal and spiritual remedies for diabetes and other ailments. Naturopathic pharmacies (photograph 7) carry local and imported products for a wide variety of ailments, including diabetes, sexual dysfunction (a common complication of diabetes), and the effects of black magic. 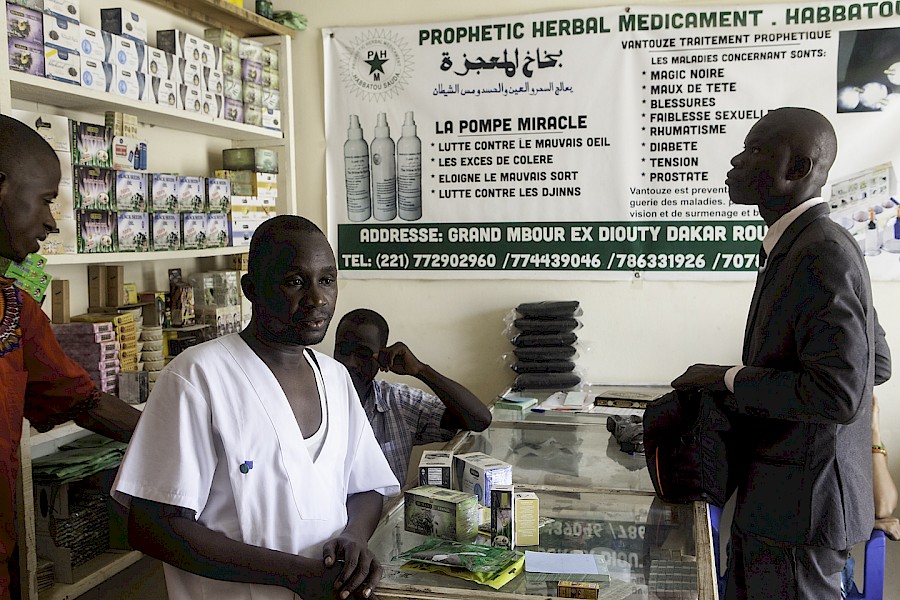 Reflecting on the work of the pioneering visual anthropologist David MacDougall(MacDougall and Taylor 1998),Mark Henri Piault and colleagues(2015)state that visual anthropology can allow us to come to know a subject of inquiry through alternate means and on individual terms. These photographs bring into view the intimate, emplaced nature of diabetes management in Senegal. Each of the settings where diabetes is managed on a day-to-day basis brings unique challenges. In health care settings, providers must consider people’s economic realities and make compromises in treating the disease. Within the home, individuals struggle to navigate the isolating aspects of diabetes management and family and social obligations. In the community, even those individuals who can afford to purchase large quantities of fruits and vegetables and lean meat and fish must choose these over increasingly available and desirable high-sugar processed foods. Creating solutions to the diabetes epidemic in Senegal will require multifaceted strategies that take into account the diverse stakeholders and spaces that are involved in the daily management of diabetes.

Steven Rubin, MFA, is Associate Professor of Art at Penn State University. He has worked for more than twenty years as a freelance photojournalist and documentary photographer. His photographs have been published in The New York Times Magazine, National Geographic, Time, and Newsweek.

Rhonda BeLue, PhD, is Professor and Chair of Health Policy and Management at St. Louis University. Her research focuses on understanding the role of the family in health and health care, chronic diseases in low- and middle-income countries, and immigrant health. She writes for both public health and health management audiences, seeking to use research to inform practice and policy.

All names are pseudonyms.