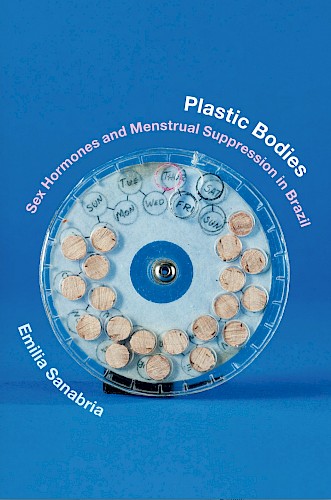 Is menstruation natural? Emilia Sanabria’s Plastic Bodies: Sex Hormones and Menstrual Suppression in Brazil is a nuanced and richly detailed illumination of the cultural politics of bodily ‘nature’. It offers a different perspective than common narratives of medicalization used to explain the prevalence of technopharmaceutical intervention in contemporary Brazil. Sanabria describes her book as telling ‘two intertwined stories: the story of hormonal menstrual suppression and a story about bodily plasticity and malleability’ (p. 5). Indeed, by examining synthetic hormones as a material (not a bounded ‘object’) with multiple histories and trajectories, she not only illuminates how the practice of menstrual suppression is conditioned by local and global forces but also uses it to illustrate a theory of bodies that troubles presumed boundaries of many sorts.

Plastic Bodies is based on three years of ethnographic fieldwork in Salvador de Bahia, which Sanabria describes as a place with deep inequalities and great vibrancy. The book’schapters can be divided into two sections, the first focusing on menstruation and the second on synthetic hormones. In chapter 1, Sanabria considers how Brazilian women experience their menstruating bodies. She leads the reader through a tour of menstrual lore, exploring menstruation’s paradoxical qualities of being both habitual and exceptional, filthy and cleansing, material and affective. In an inversion characteristic of her thinking in this book, she asserts that managing menstruation produces an interior and exterior body/self, in contrast to the more common formulation of menstruation transgressing pre-existing ideas of bodily interiors and exteriors.

In the second chapter, Sanabria addresses menstruation’s naturalness. She approaches this from an unusual angle; instead of showing its cultural contingency as semiotically mediated and managed by products and spaces, as one might expect, she thinks with a discourse used by professionals and consumers of medical technology that actively calls menstruation’s physiological function into question. Menstruation is articulated in Bahia as a byproduct of modernity in two ways: first, past generations and indigenous women don’t menstruate because they are engaged in pregnancy or nursing for most of their reproductive lives, and second, hormonal contraceptives that ended this constant childbearing introduced a convention of ‘fake periods’ that are simply withdrawals from medication. Menstruating is thus neither natural nor necessary. Rather than heralding the precontraceptive past as a ‘natural’ purity to which we should aspire, as one might find in some Euro-American contexts, the Brazilians in Sanabria’s study embrace the constructedness of modern bodies, electing by and large to eschew menstruation. Such a choice is implicated in regimes of self-maintenance, sexuality, femininity, and upward social mobility.

Chapter 3 begins the section on synthetic hormones. Sanabria considers hormones as located at the boundary between sex and gender, showing how some aspects of sex (thought to be located in the body) circulate outside the body (the provenance of gender). Sex is anatomical as well as chemical, inevitable and a matter of agency. Hormones, she argues, are always in excess of the sex/gender binary, but are nonetheless largely used to reinscribe dualistic models. In Bahia, hormones (like blood) are understood through a humoral logic of depletion and concentration, overflow and balance. Sanabria discusses upper-class women using hormones to ‘cheat biology’, enhance libido, and mitigate emotional fluctuation. Such ‘lifestyle effects’ enable women to become superwomen by accessing ‘maleness’, but the inverse is not socially or medically sanctioned, as demonstrated in her discussion of travestis using hormones at home to effect partial, improvisational femininity without surgery.

Chapter 4 considers biopolitics, specifically how inequality is manifest in health and hormone use. Beyond the respective extremes of the private and public health care systems, often highlighted in the book’s poignant descriptive contrasts – lavish interventions versus lack of basic services – hormones are packaged and marketed to reflect different assumptions about class. These create ‘parallel forms of citizenship’ (p. 132), iterated in idioms of population control, contraception, and social responsibility on the one hand and autonomous self-management on the other. Crafting one’s body is an aspirational class process reserved for those deemed worthy of making individual choices. It is not only access to drugs/hormones themselves that (re)produces social differences but also access to the meanings attached to them.

The fifth chapter elaborates how marketing and packaging produce different meanings and thereby different products. Sanabria considers how the difference between ‘side effects’ and primary effects is variably determined. She also considers the relation between form and materiality: pharmaceutical hormones dissolve and thus are not ‘objects’ for long, yet distinct meanings are attached to their forms (IUD versus ring versus pill, for example) and global distribution chains inform the chemicals and the uses to which they are put. In Sanabria’s words, synthetic hormones have ‘informational and material environments that become co-constitutive with their molecular properties’ (p. 162). She discusses compounding pharmacies, tailored dosages, and blurred indications to argue that drug use is largely improvisational and experimental, which aligns with her broader argument against the pervasive idea of underlying ‘real’ pharmaceutical effects. All drug effects (‘placebo’ and otherwise), she insists, result from the interplay between the biochemical and the sociosymbolic.

Ultimately, Plastic Bodies delivers everything it promises. Sanabria’s detailed ethnographic exploration of menstruation and sex hormones yields a theory of bodily plasticity that encompasses the malleability of sex, gender, physiological processes, social class, and drugs themselves. Plasticity as a concept marks malleability as well as its limits; materiality and meaning constrain one another, as well as produce one another. We always destroy as we transform. The concluding discussion of plasticity is one of the most interesting parts of the book, where Sanabria’s impressive ability to weave together a wide range of anthropological and philosophical work is particularly well employed. She argues that bodies are not canvases for chemical saturation or technological intervention; they are always already constituted in these ways. The corpse is not the body; the body is the making. In making these claims, Sanabria is not arguing aboutBahia but fromBahia: bodily plasticity is no greater there, she says, but Bahians are less delusional about this fact, and do less work to conceal and naturalize it. Yet although the Euro-American notion of aligning the body with a pre-existent real/internal self is absent, metaphors of fixity continue to abide and prevail over ones of malleability. The idea of the bounded body is tenacious. Sanabria writes that the ‘ontological politics of reproduction turns on this problem of alterability’ (p. 188): not just what change to choose, but the differential availability of alterations and the deployment of unwanted or life-taking alterations. She concludes by alluding to a politics of plasticity, wherein this alterability is managed not by choice, but by collaborative design.

Andrea Ford is a postdoctoral fellow in Anthropology and the Social Sciences at the University of Chicago. She researches childbirth and reproductive toxicity in California and is working on her book, Near Birth: Embodied Futures in California. www.andrealillyford.com.