Bat portraits in times of pandemic

In this Photo Essay, photographs are combined with drawings collected in Burkina Faso in the years following the 2014–2016 Ebola outbreak. Portraits of bats are shown. The blacklisting of these animals following the recommendations of health authorities collides with local realities, where it is not possible to talk about bats in a ‘general’ sense. The same is true today in the period of COVID-19, when chiropterans are once again in the etiological hot seat: bats are behind the pandemic, according to Ridley’s shock phrase (2020). In Burkina Faso’s Lobi country, between the red and black fruit-eaters (which have always been eaten) and the small insectivores (which have never been eaten as such, but are very useful to animist healers), there is a chasm of representation that is unveiled by these images.

How to make bat portraits?

First, choose a location. For me, this was the south-west of Burkina Faso, in the Dagara and Lobi countries, where I have carried out ethnographic research for several decades.

At the time this project was conceptualised, I was posted at the LAS (Laboratoire d’Anthropologie Sociale) in Paris, working on a programme directed by Frédéric Keck entitled ‘Social Representations of Pathogens at the Borders between Species’. This was in 2016, at roughly the same time as the WHO announced the end of the Ebola epidemic in West Africa. While our fieldwork took place in Burkina Faso, our research was based in Paris.

Burkina Faso was not affected by Ebola, but, by having our research participants produce portraits of bats as part of the research programme, we were able to detect in the country’s collective consciousness a latent fear of the virus’s transmission. Looking at the portraits afterwards, it was impossible to miss the point: frugivorous bats (who were capable of transmitting Ebola) were being singled out as animal pariahs capable of spreading diseases.

Simultaneously, however, microbats (a species of insect-eating bat) were gaining more visibility with the discovery of the Bombali virus (Tracey Goldstein et al. 2018). The same goes for other insectivore bats, including the Rhinolophus affinis, which was recently implicated in relation to the COVID-19 pandemic (Anderson et al. 2020).

We decided a camera would be an essential tool, but, as the word ‘portrait’ in French etymologically supposes drawing, we provided art supplies too. The heuristic scope of the portrait as a medium is well studied (Cros 2017); it is able to reveal certain meanders or effects of what is unseen.

Eight bat portraits (a mix of photographs and drawings), collected between 2016 and 2018, will be presented here. They form part of a research project focusing on the stories, myths, and images of bats, both in relation to and independent of Ebola. The project goal was to describe local perceptions and understandings of those people who live alongside these liminal non-human inhabitants, who can themselves so easily pass from the bush into houses, unnoticed under the cover of darkness (Cros 2020). 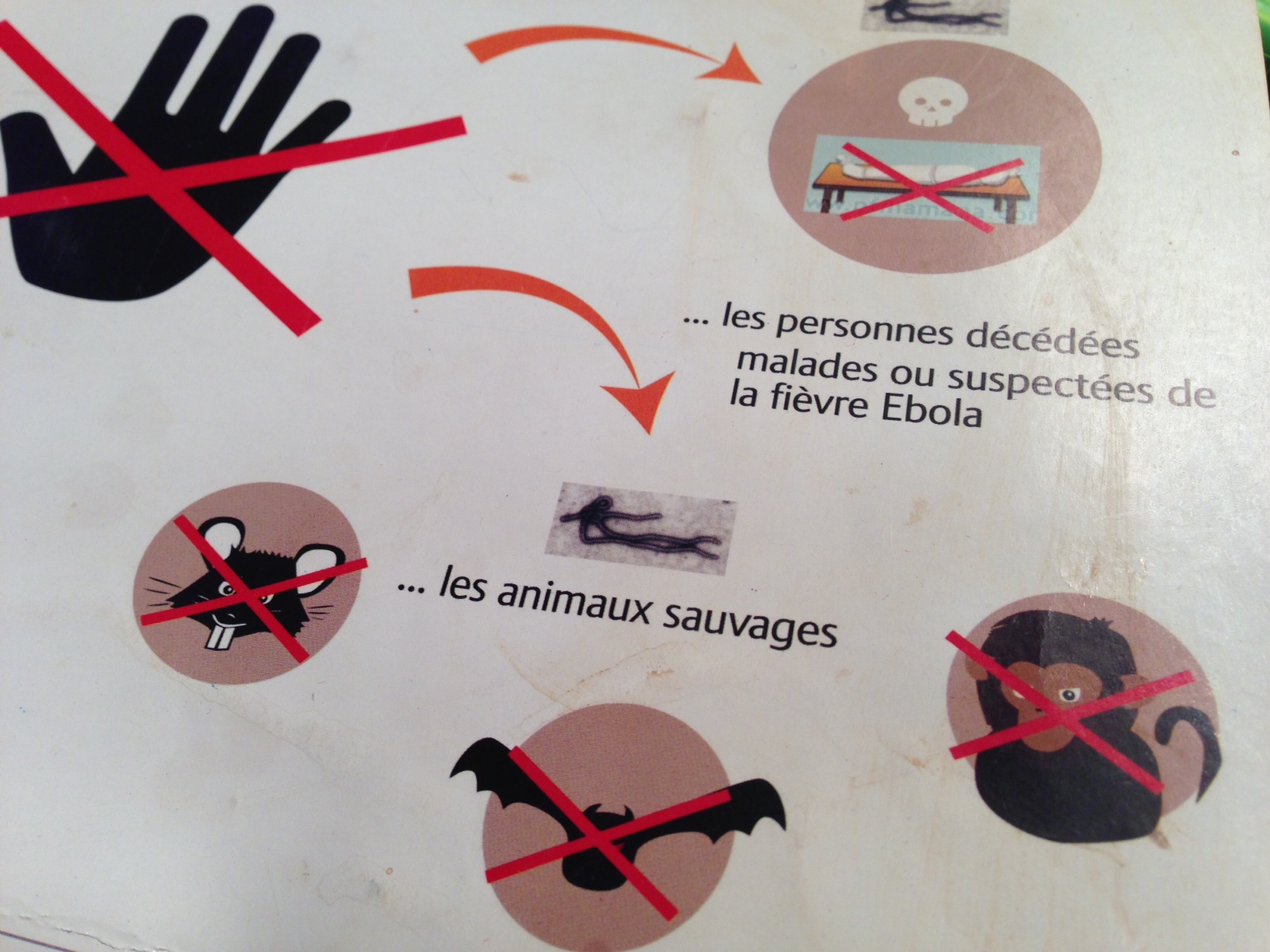 This is a UNICEF poster that can be found all over French-speaking Africa. On the reverse side it states that people must avoid ‘any contact with [wild animals, such as] monkeys, chimpanzees, gorillas, bats, hares and porcupines found dead in the bush or killed and not eat their meat.’ The way ‘bat’ is written on this poster in French is strange: it is not the standard ‘bald mouse’ (or ‘chauve souris’), as it should literally appear in French, but ‘saving mouse’ (‘sauve souris’). This matches a central assumption of our project, as most people understand ‘avoid eating’ as ‘avoid touching’. 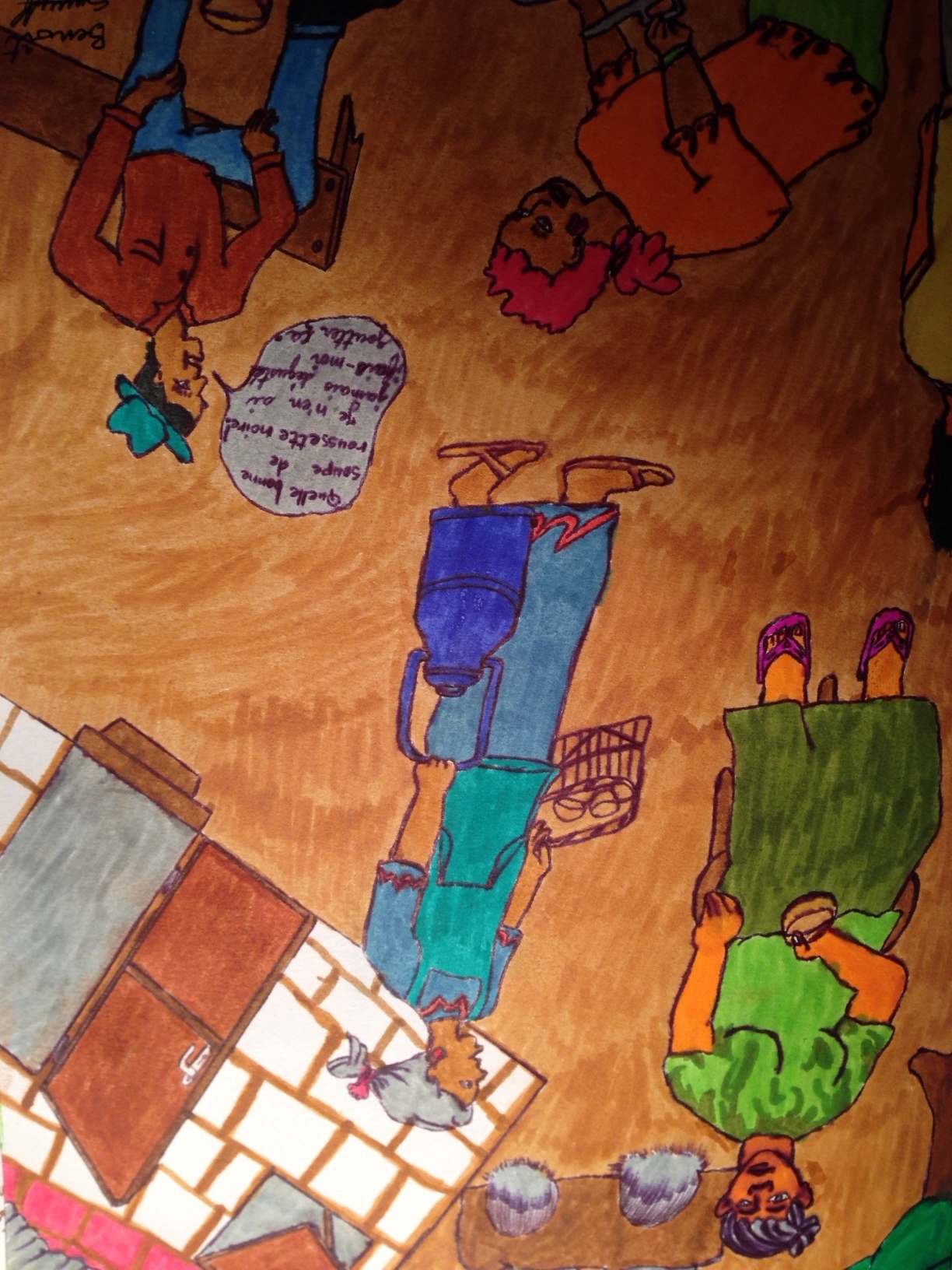 As the young Ollo Benoit (a son of the family with whom I stay in Lobi country, at this time working at the hospital of Gaoua) told me, bat soup is said to be delicious and the women who sell millet beer used to offer it to their customers. Black bat broth is said to be tastiest of all, although these fruit-eaters are now rare. ‘With the ongoing deforestation, in particular due to artisanal gold mining in the region, they are becoming hard to catch,’ Ollo adds. 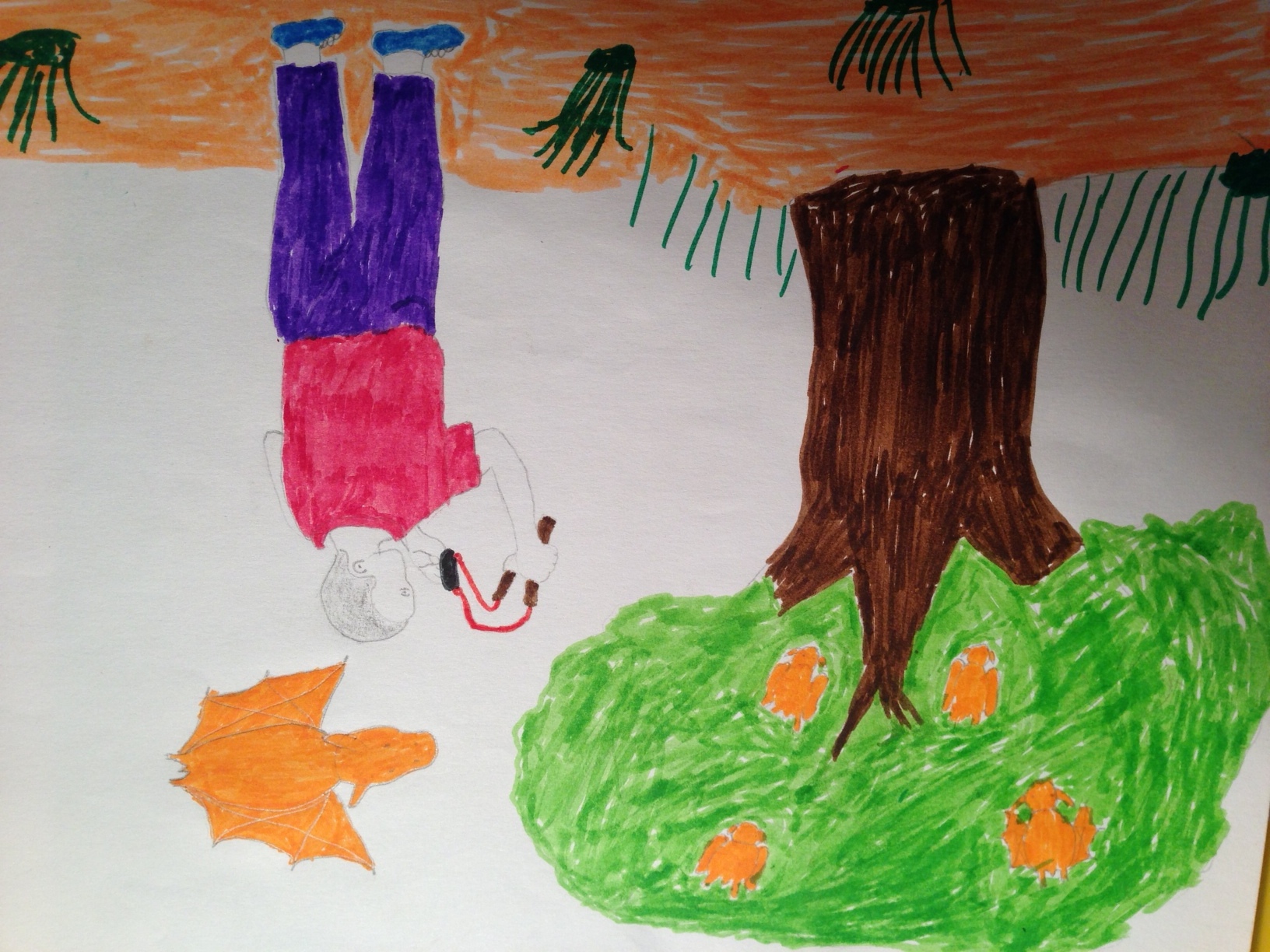 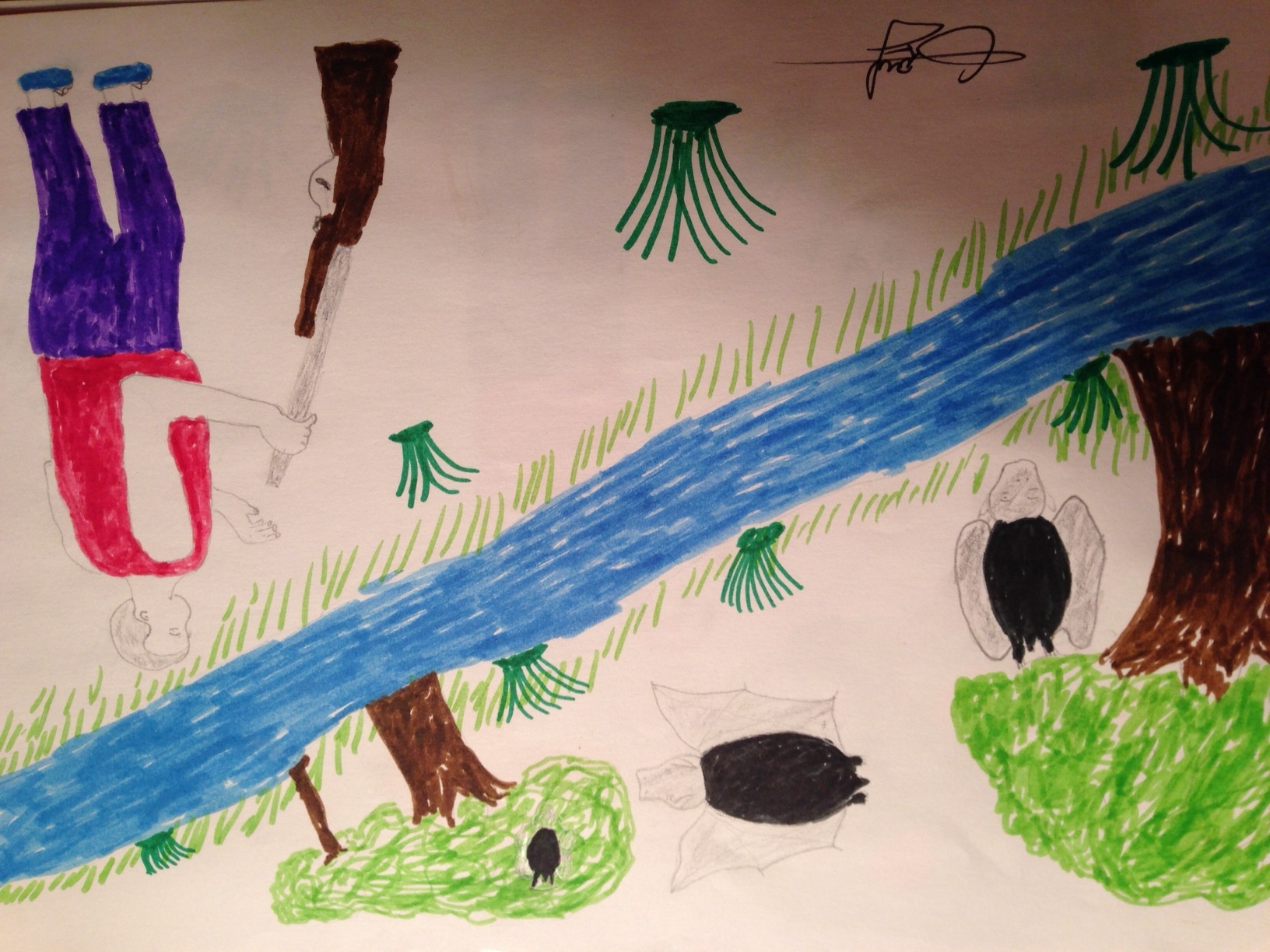 Techniques for hunting bats depends on the bat in question’s colour. The black ones [diin bir in Lobiri, the language of the Lobi] are larger and can’t easily be killed without a gun. The red ones [diin sie], however, are easy to catch; even a child can do it. You just need a sling and to aim well. The hunters of the Lobi country only hunt red ones if they can’t kill any other prey. Clizogone’s drawings (above) show the differing methods hunters use to catch black and red bats. 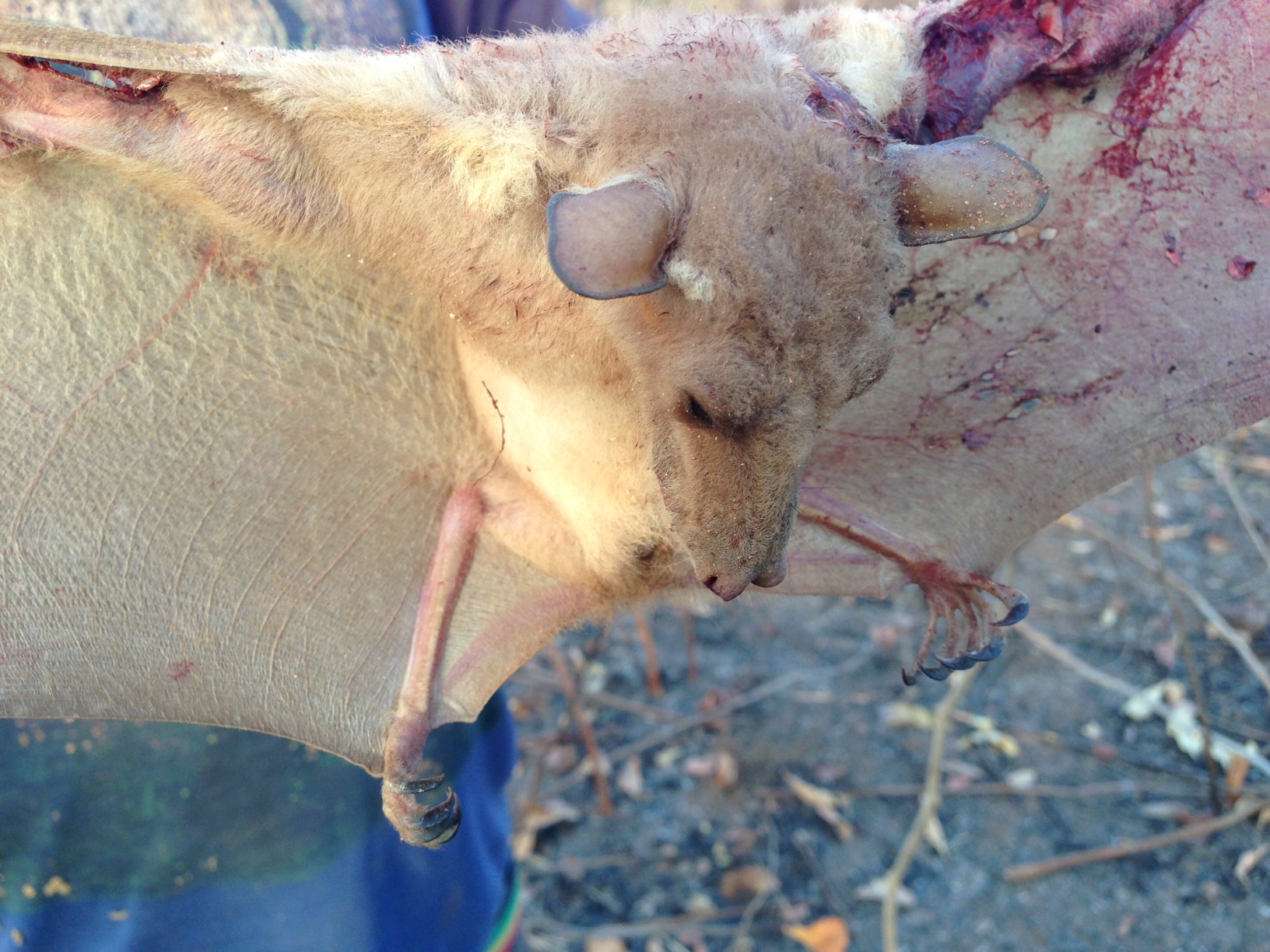 One day I went with a guide to look for red bats in a cave at Dano in Dagara country. They seemed impossible to find, but, on returning from this expedition, a group of young village men who knew the aim of our expedition showed us a magnificent red bat that one of them had just shot with his sling. As it was not edible at this time, we wondered why had it been kept. 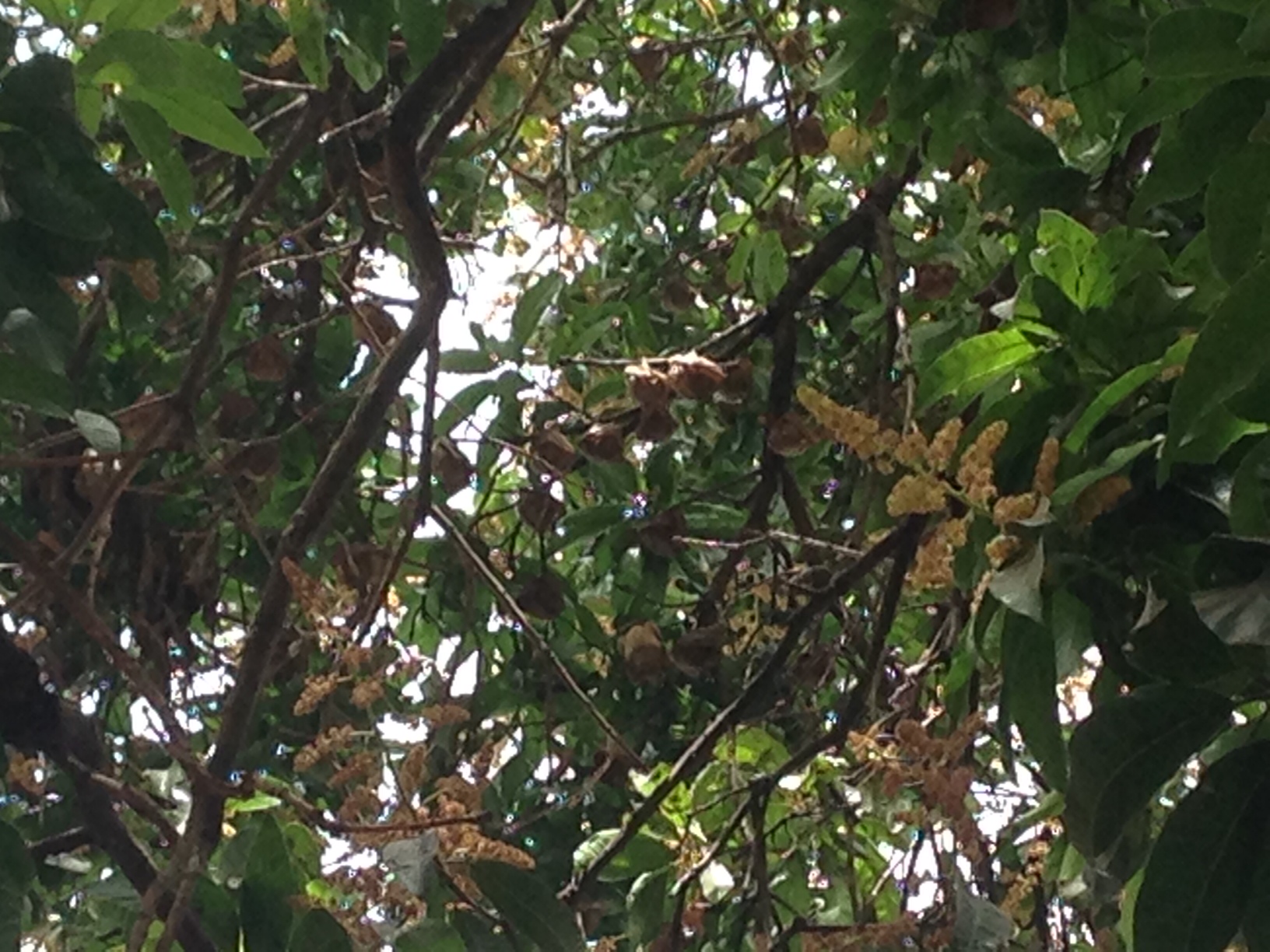 A soothsayer-healer told me that red bats are found on mango trees, where they roost in large numbers even before the mango season begins. You have only to look up into the dense shade of a huge mango tree to find them clinging to the branches, their heads down. I’d never noticed them before, despite having passed many hours during my time in Burkina Faso sitting under mango trees.

My awareness of Ebola and the research project gave me pause. The bats were comfortable, totally undisturbed by our presence; they merely hung, silently watching everyday life unfold in the nearby village. The soothsayer-healer told me he had never eaten them, Ebola or not. He does, however, use their droppings to treat numerous diseases and, notably, children’s respiratory ailments. They are his valuable animal aids. I asked permission to take a photo of the bats and the soothsayer-healer assented. 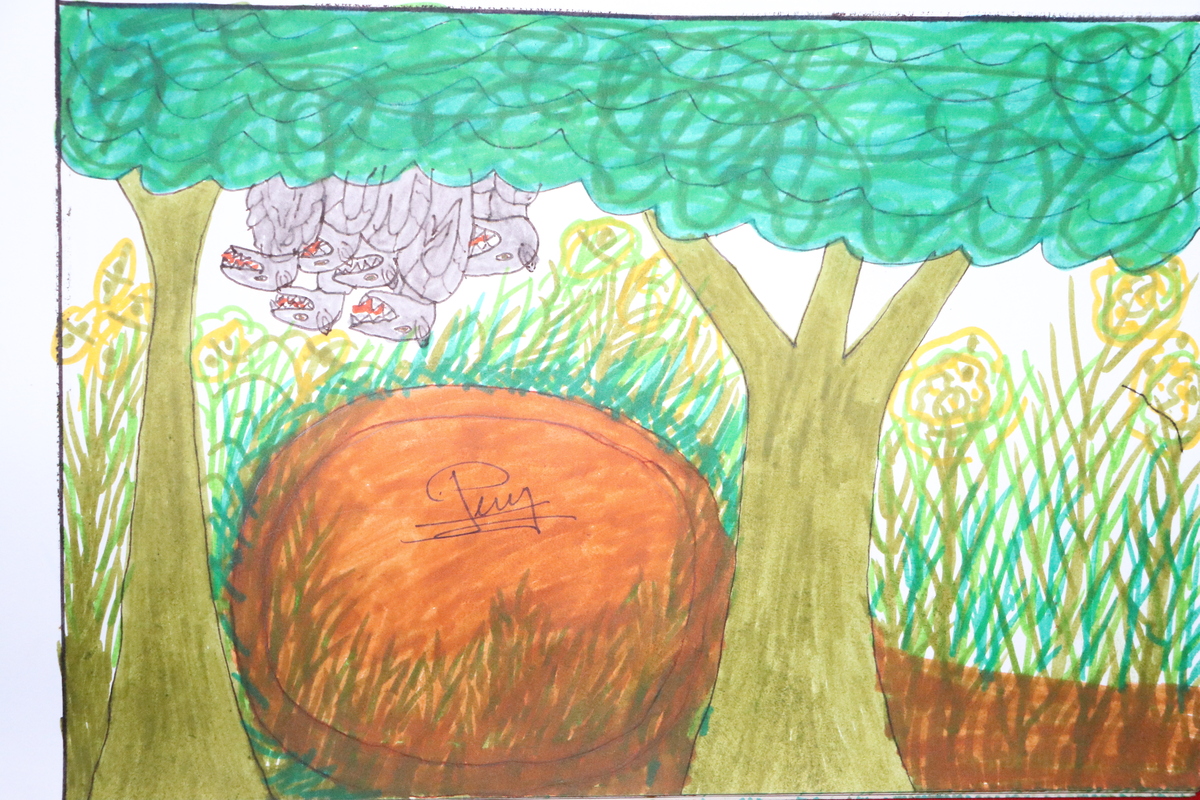 The Lobi live in an animist world full of ‘dangerous spaces’ (a literal translation of the Lobi expression papu para) in which bush genies and their domestic animals live (including some of those classed as ‘wild animals’ on the UNICEF poster). One of these dangerous ‘sacred places’ was drawn by Diniaté Pooda, a former soothsayer-healer in the Lobi country. His picture illustrates a well whose water never dries up, to which men come and make sacrifices under the gaze of the bats who find a safe refuge there. It is out of the question to shoot a fruit bat in such a place; the anger of the genies would be terrible. 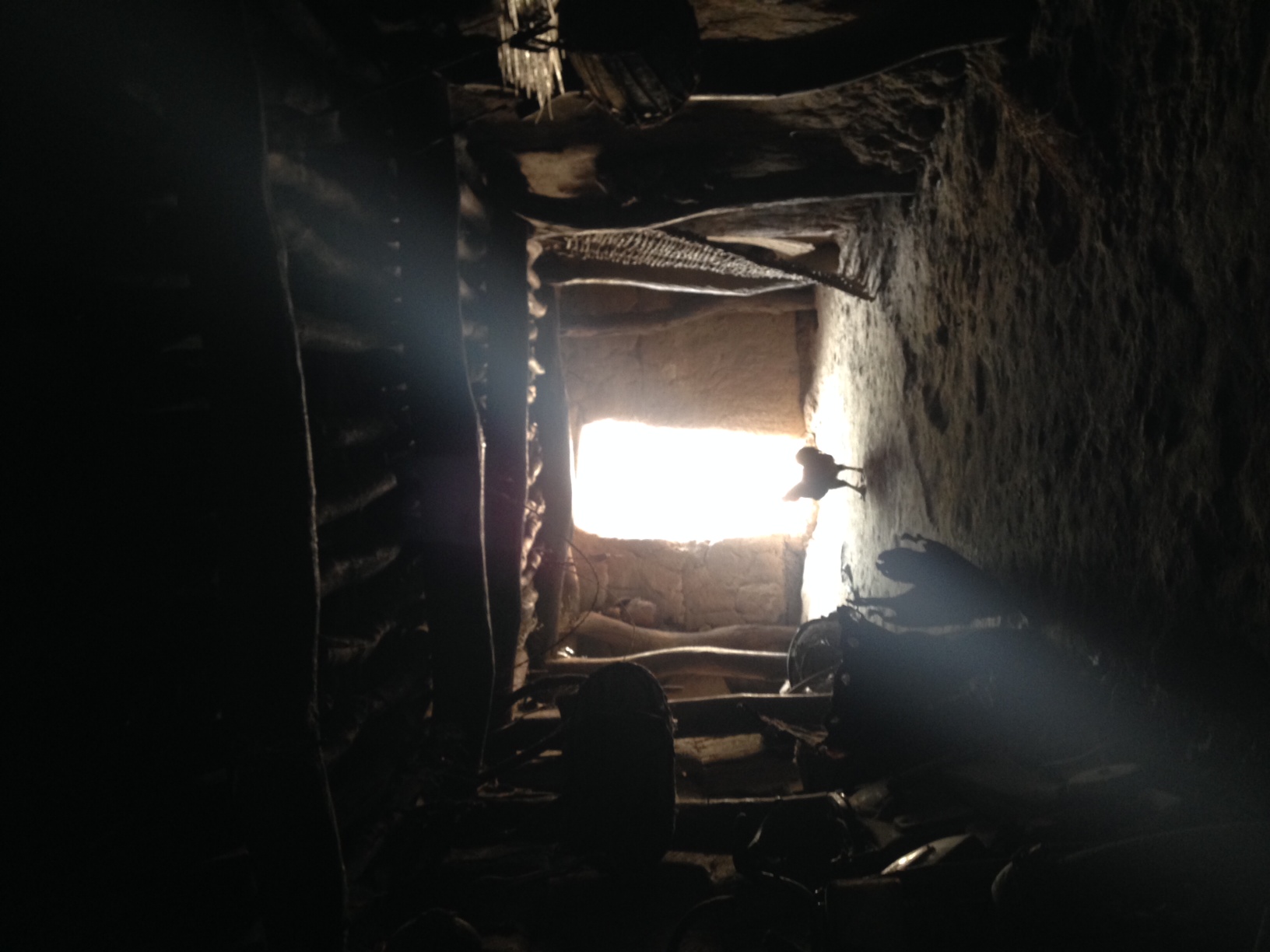 7. Probable small insect-eater in the entrance to a house (Loropéni 2016).

Traditional homes in the Lobi country are dark, and even those houses with roof terraces have no windows. The gbalanor entrance rooms face domestic altars. Poultry and other small animals can easily enter these homes. Small insect-eating bats [sidjumala in Lobiri] can find shelter inside without being disturbed; indeed, they might never be dislodged if they choose to roost there. The bats must have asked the thilka, the protector of the patriclan who stands in front of entrance rooms, for permission to enter and so, if they are present, it means the thilka allowed them entry. The bats therefore benefit from its protection, and are a companion species to be considered without animosity (Fairhead 2018). 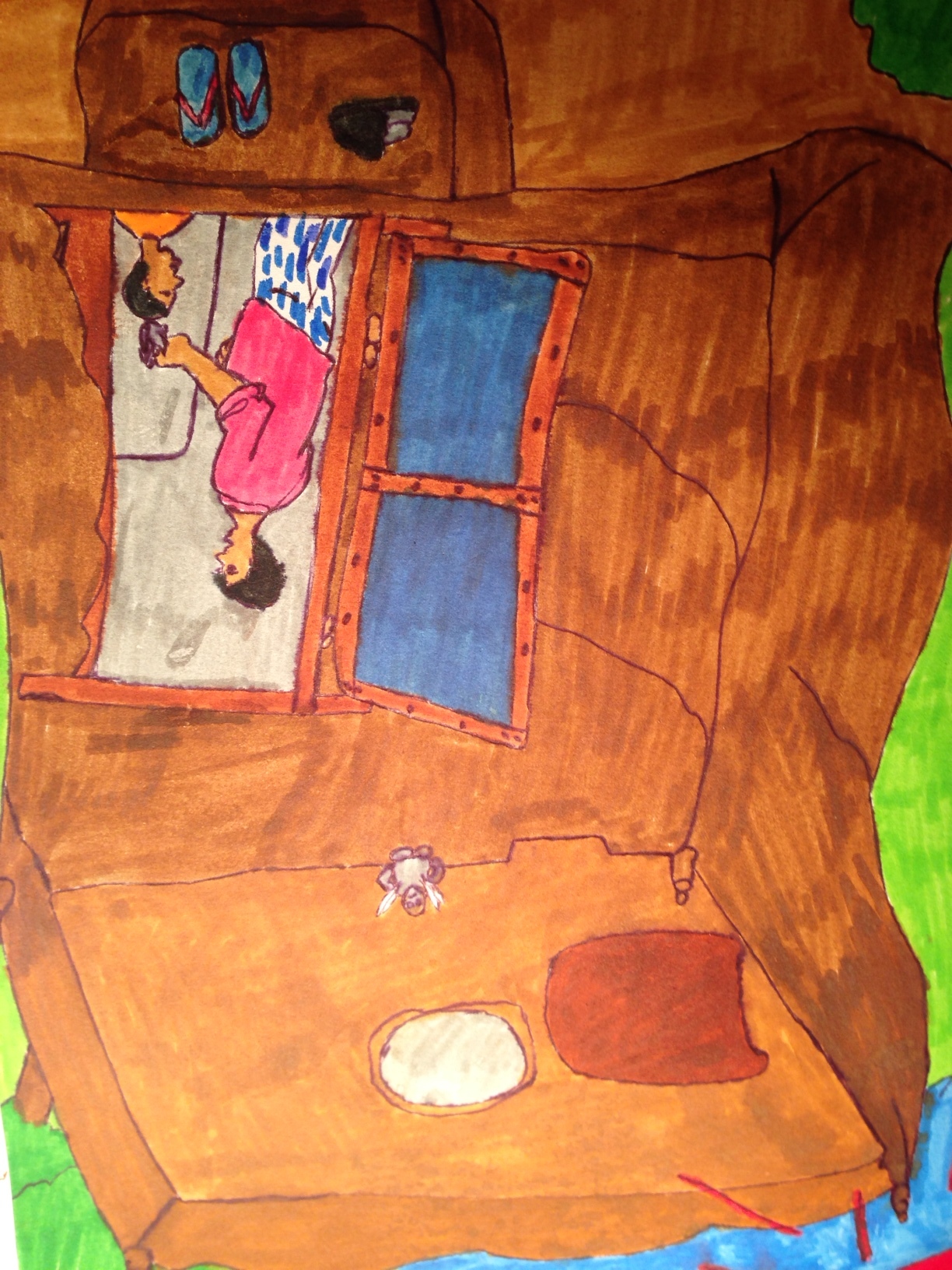 These sidjumala find practical social use in the thildu, the soothsayer-healers’ spirit rooms. Here, they can capture the spirit double of certain deathly ill patients. They hold a prickly shrub to get the bat to cooperate and sweep or ‘clean’ the patient’s body. It is a dry sacrifice; there is no bat blood involved. The young author of this drawing explains to me that the bat is set free at the end of the operation. Nobody knows where the animal goes afterwards. If everything goes well, the patient is ‘saved’. From the Lobi healer’s perspective, we are then in the presence of a ‘saving bat’. This is a world away from the representations of bats constructed in response to Ebola and COVID-19 (Ridley 2020), which allows us to suggest that the ‘typographical error’ of the dated UNICEF posters proved nonetheless to be prescient.

I would like to thank Alice Desclaux (IRD) for her enthusiasm for the idea of this piece as a MAT Photo Essay as well as Frédéric Keck (CNRS), with whom this research began within the LAS. Finally, I’d like to thank Sophie-Hélène Trigeaud (LADEC) for her help proofreading the English version of this article.

Michèle Cros is a researcher at the LADEC and worked on a CNRS secondment at the LAS from 2015 to 2016. She has worked for several decades in the Lobi country of Burkina Faso and Côte d'Ivoire while, at the same time, working as a professor of anthropology at the University of Lyon. She has written several books including Anthropology of Blood in Africa (1990) and Resisting AIDS: Stories from Burkina (2005). She co-led (with J. Bondaz and F. Laugrand) an issue of the Canadian journal Anthropologie et Sociétés titled Animal Connections—Questions of Affect and, with the same collaborators, authored the book Creatures of Thought: Visions of Animal Worlds (2015). Much of her ethno-projective research relies on drawings and narrations by their artists.