'There's a crack in everything'

Or: How Leonard Cohen inspired my research on commercial surrogacy 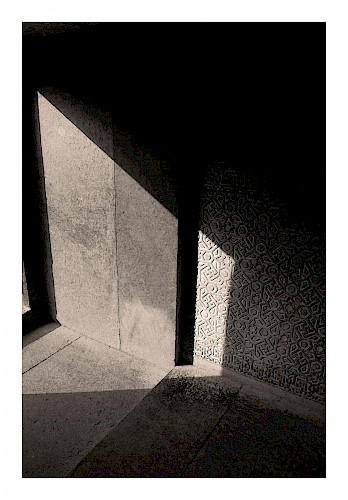 The best conversations take place at kitchen tables. At least this is what people often say. True or not, many of my research encounters in the field of commercial surrogacy did in fact take place at kitchen tables. It was also a kitchen-table conversation – this time, though, long after I had completed fieldwork – during which my friend Chris cited the chorus of Leonard Cohen’s song Anthem: ‘Forget your perfect offering. There’s a crack in everything. That’s how the light gets in’. The lines resonated, she said, with an observation I had just shared with her: that the surrogacy accounts of my research partners – surrogates and intended parents, clinic and agency staff, doctors and psychologists, and many more – often contained neat and impermeable narratives that left little space for any cracks or light. That is to say, they left little space for insecurities and ambiguities that can be unsettling but that are inevitably part of our lives, adding texture and complexity to our experiences.

Two of my research participants’ stories were particularly telling in this regard. The first was David’s. At the time of our interview, he and his partner had been fathers through surrogacy for one and a half years. In a very affectionate tone, David told me about Venera, the woman from Siberia who had carried their son. She was a ‘normal middle-class woman’, he said, implying that she did not have to become a surrogate: she chose to. Her motives went beyond economic gain, as he emphasized, ‘She is very Christian and you really notice she is a warm-hearted, generous person who obviously has some kind of calling for this’. He underlined his point by arguing that he and his partner were still in close contact with Venera, that she regularly demanded (verlangen) photos of the child, and that they referred to her as the mother when talking to the child. When Venera recently agreed to carry another pregnancy for the couple, tears came to David’s eyes, for this was the ultimate proof that their relationship was based on something ‘much more human than a mere financial transaction’.

Not all surrogates appreciated such close relations with ‘their’ parents. Lena, for instance, who I got to know in the first weeks of her surrogate pregnancy, repeatedly emphasized that surrogacy was just a job and that she was interested in the money, not in an emotional relationship with the child or the intended parents. She was therefore happy to be working through a surrogacy agency in Moscow. That way, she only knew the intended mother’s name, that she was married, and that she was thirty-six years old. Any additional information would have been ‘useless’ (bezpoleznyj) to her and to doing the job, she told me with an indifferent shrug. Lena consistently skirted all of my questions about the (potentially difficult) emotional aspects of surrogacy by giving me short and evasive answers, implying that there simply were no emotional aspects to talk about. She was always in a good and humorous mood when we met, during the pregnancy as well as after it, and she seemed to enjoy her time in the capital city, where she had moved for the course of her pregnancy.

Both David’s and Lena’s surrogacy accounts outlined a ‘perfect’ surrogacy experience. In very different ways, they presented their surrogacy programmes as carefree and unproblematic. Lena stressed the convenience and simplicity of a business relationship; David, in contrast, recounted a picture-perfect love story between intended parents and surrogate. But it was exactly this perfection that made me cautious: if their narratives could not be questioned, is it because they were standing on shaky ground, as if any uncertainty might destabilize the whole story or their position? This shaky ground was somehow perceptible and yet impalpable. Only upon looking closer, upon learning different perspectives on the same story, or upon building bonds of trust, did the ‘perfect offerings’ reveal their cracks.

In David’s case it was the slight discrepancies between his and Venera’s versions of their story that made the cracks visible to me. While he had foregrounded her altruistic motives, it became clear that financial problems were a key factor for Venera. As she told me, separately, her salary as a cook in a school canteen was barely enough to cover basic expenses and, being a single mother, there was no additional income to support her own child. While David stressed their frequent communication and that Venera ‘demanded’ photographs, she said that she enjoyed the contact but only ever reacted to messages rather than initiating them. And while David’s son will grow up thinking of Venera as his mother, Venera was unsure whether she would ever tell her son about the surrogacy.

Lena’s account developed a different twist, when two and a half years after she had given birth she wrote to me: ‘I shouldn’t have done this; now I regret my decision… . This was a mistake!’ She could not explain the exact source of her regret: it was more of a feeling, a feeling ‘about the soul and the conscience’ and about having committed a ‘sin’, without being able to pinpoint where this feeling came from. This sensation was not new: Lena wrote that she had felt this way during the pregnancy, though at that time we were in close contact and she had never even hinted at her doubts in our conversations. I was startled by her comments and they left me with a big question mark. It may be that, in a context in which surrogates are accused of transgressing moral boundaries by selling their bodies and ‘their’ children, Lena came to develop the feeling of having committed a sin (Siegl 2018).

I received Lena’s messages of regret a few days before Chris’s visit to my house and it was this story that I told her over breakfast at the kitchen table. I shared my confusion and bewilderment about how frequently during my fieldwork I had encountered narratives that appeared to be perfect offerings, closed and seamless, but which would often crack upon closer inspection. What methodological value did this observation have? What did it say about the context and practice of surrogacy?

Being a ‘cultural anomaly’, as anthropologist Elly Teman (2010) writes, commercial surrogacy challenges the social structure and moral codes of society. It disrupts traditional notions of parenthood, as childbearing moves from the intimate sphere to that of clinics, markets, and money. My thesis takes these disruptions as a starting point. Building on Michel Foucault’s (1990, 2000) work on ethics, I ask how disruptions translate into the ‘ethical labour’ (see also Dow 2016; Førde 2016) that actors in the field of surrogacy perform to legitimize and ‘normalize’ this morally contested practice. Precisely because surrogacy is a potential disruption, it becomes necessary for many to present a perfect story, one that is free of cracks and thus free of ambivalences. Concealing these cracks may be seen as a form of ethical labour, done to shut out the light that Cohen speaks about and to protect the perfect offering. Research participants offer these perfect narratives to me, the potentially sceptical anthropologist and listener whose sympathy and understanding they seek. Through me, the stories are also meant to reach a broader audience and thus improve surrogacy’s reputation in society, an aim that was clearly articulated by some of my interlocutors and that had sparked their interest in my research in the first place. On a less conscious level, such stories may also serve the intended parents and surrogates themselves: by concealing the cracks they create a narrative that helps them nip any doubts in the bud. This may be a move of existential necessity, for they cannot afford to question the foundations of their intimate choices. Surrogacy is an emotionally challenging endeavour for both sides, not least because intended parents and surrogates embark on a journey they initially know little about. Through the months or even years of struggle, uncertainty, and conflicting feelings, they pursue a common objective: a happy end.

Veronika Siegl is a postdoctoral lecturer in Social Anthropology and Gender Studies at the University of Bern, Switzerland. In her PhD thesis ‘Fragile Truths: The Ethical Labour of Doing Trans-/National Surrogacy in Russia and Ukraine’ (2018) she explores the role of morality and ethics in making sense of, judging, legitimizing, and governing the intimate and affective relations produced in the sphere of commercial surrogacy.