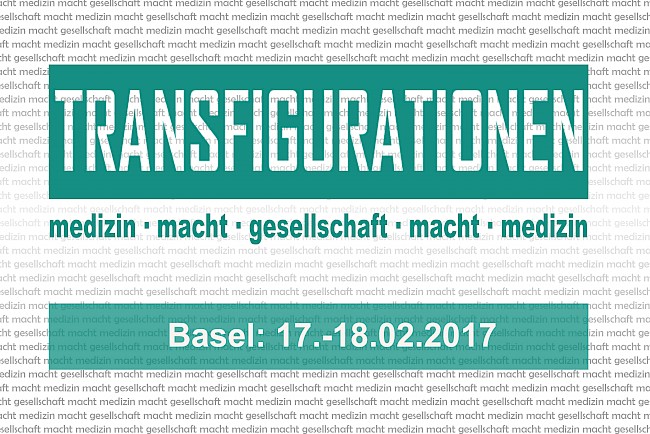 How can we conceptualize medicine, health, and healing in ever-changing economic, legal, technological, and political constellations? How do material and institutional, but also affective and emotional, dimensions of health-related practices, socialities, identities, experiences, and objects intersect at different scales, from the local and national to the transnational and global? How are these processes embodied, also with regard to different temporalities? The introduction of ‘transfigurations’, a concept that has so far not been used in medical anthropology, was intended to stimulate discussions about these questions. Both the concept and the conference around which it was based sparked processes of thinking through the emergence of radically new constellations with regard to both their human and nonhuman elements, as well as their partially contradictory, often elusive relations to each other.

The panels and discussions made use of the concept of transfiguration to designate processes of sociocultural change in the context of medicine and health beyond ideas about controlled and linear developments. Hence ‘transfigurations’ describes diffuse and ambiguous situations with an open and unexpected outcome. In contrast to ‘assemblages’ and ‘transformations’, the concept implies a processual character of fluidity and of dynamic but always incomplete change.

There were twenty-two individual presentations within the six panels, not all of which can be detailed here. The full conference program is accessible at: http://www.sagw.ch/de/seg/commissions/MAS/trinat-conference.html. The second day commenced with a keynote lecture by Andrea Muehlebach (University of Toronto), which illustrated how the concept of transfigurations may be useful for thinking through processes of transformation that evade a controlled and expected outcome. Her study of ‘economic suicide’ in Italy – death by public self-immolation, a phenomenon that has emerged since the onset of the global financial crisis and has garnered significant media attention – illustrates how a ‘mad economy’ gains autonomy and becomes uncontrollable. Suicide in this context should not be understood as an individualized pathology but as a phenomenon that is both a diagnosis of and resistance to a pathological system. It makes individual suffering a public concern, and assumes bodily sovereignty by turning the burning body into a media spectacle. Thus, the phenomenon of economic suicide points to transfigurations in the relationship between individual affliction and how it is situated, instrumentalized, and publicly represented within a capitalist society.

The first panel, ‘Therapeutic landscapes: Pharmaceuticals, commodification and epistemologies’, explored the transfigured roles of medicines within changing legal and economic constellations. Stephan Kloos (Austrian Academy of Sciences, Vienna) made a case for conceptualizing traditional Asian medicine as a medical industry following market logics. Márcio da C. Vilar (Leipzig University), in his case study of a Brazilian immunostimulant therapy, and Sandra Bärnreuther (University of Zurich), in her study about one hormone’s transnational trajectory, explored biotechnological innovations and the legal, political, and economic configurations in which they are embedded.

The second panel, entitled ‘Good aging, dignified dying: Bureaucratization, biopolitics, and the value of life’, engaged with social and institutional transfigurations through which aging and dying acquire new meanings. Marcos Freire de Andrade Neves (Federal University of Rio Grande do Sul and Freie Universität Berlin) showed how Germans who apply for assisted suicide in Switzerland have to navigate through life-oriented regimes of care. In her autoethnographic reflections, Martine Verwey (independent scholar, Zurich) argued that patients themselves can also be transfigured into already-dead bodies through objectifying treatment by care attendants.

Panel three went by the title ‘Between increasing precarity and empowerment: Marginality, participation, and the economization of healthcare’. The speakers engaged with transfigurations of health care provision in the national contexts of Egypt (Mustafa Abdalla, Freie Universität Berlin), Brazil (Maria Lidola, University of Konstanz), and Tanzania (Melina Rutishauser, University of Basel). Both Lidola and Rutishauser showed that investments in public health provisions may not necessarily result in greater access to health care for marginalized populations. Additionally, Abdalla described how patients capitalize on their diseases by offering themselves as living case studies in the context of medical examinations at medical schools in Cairo.

Panel four, ‘“Good care?” Ideologies of reproduction and of aging’, explored how care and ideas about giving birth are negotiated within state and nonstate contexts. In her study on aging in Zanzibar City, Sandra Staudacher (University of Basel) extended the concept of the ‘figuration’, defined by Norbert Elias (2000, 481–82) as a ‘network of interdependencies’ and ‘a structure of mutually oriented and dependent people’ that points to a dissolution of a clear-cut separation between individual and society. Staudacher illustrated that these networks of interdependency are not static but subject to constant change. She portrayed the trans-figurations in Zanzibar throughout a person’s successively transforming and differently composed health situations. Drawing on the religious connotation of transfiguration, Cecilia Colosseus (Johannes Gutenberg University, Mainz) analyzed the politicized debates about a ‘good birth’ in Germany, which contrast biomedicalization with emotionally underpinned ideas about naturalness.

The fifth panel, ‘Relocations: Biosocial identities between self-positioning and external ascriptions’, traced the ways in which national and transnational discourses reconfigure local subjectivities. Giorgio Brocco (Freie Universität Berlin) showed how Tanzanians with albinism negotiate their identities between discourses about disability and ablebodiedness. Similarly, Francesca Rickli (University of Zurich) argued that discourses about ‘successful aging’ and related policies dramatically change how elderly people with disabilities position themselves and are cared for in Swiss society.

The final panel, ‘Professional aspirations in the healthcare system: Labor mobility and translations’, examined transformations of biomedical systems and health institutions induced by health practitioners’ labor migration. Lisa Peppler (University of Göttingen) illustrated how Turkish doctors have carved out a particular position within the German health care system by drawing on and actively contributing to the discursive ‘discovery of the Turkish patient’. Finally, Judith Schühle (Freie Universität Berlin) described how Nigerian doctors who have migrated to the United Kingdom and the United States go on to transform the biomedical system in their home country through ‘medical remittances’.

Medical anthropology in Switzerland, Austria, and Germany: Institutionalization and fields of application 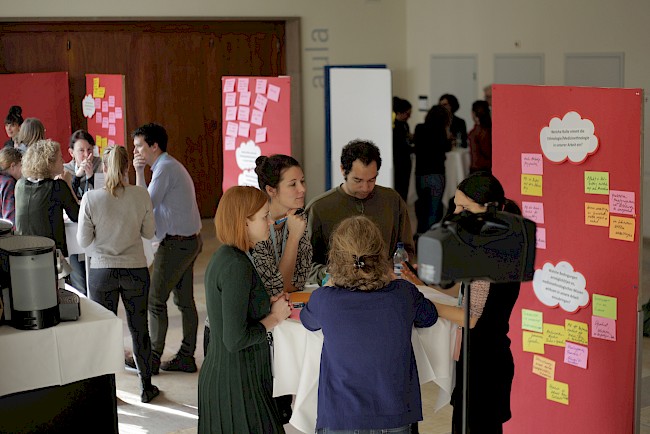 During the world café the conference participants discussed how medical anthropologists can contribute to applied fields. Photo credit: Rebekah Hoeks

In spite of the panelists’ positive forecasts for the future of medical anthropology, Hadolt warned against the risk of engaging in self-referential debates and the danger of ‘stewing in our own juices’. Similarly, Obrist emphasized the importance of producing applicable knowledge in cooperation with adjacent disciplines, while Dilger referred to medical anthropologists’ well-established strength of self-critically reflecting on their positionalities and of questioning normative assumptions in human rights and sustainability discourses.

Similar competences were pointed out during discussions, held in a ‘world café’; a format to foster theme-based conversations among small groups. During three discussion sessions, participants debated the possibilities and requirements for medical anthropologists to contribute in applied ways, such as participating in health projects led by nongovernmental organizations and in the formation of health policy. The participants concluded that their core roles were to function as cultural translators, to critically reflect on the hegemonic position of biomedicine, to bring in regional and culture-specific knowledge, and to reduce complexity without simplifying. Necessary conditions that were identified for such involvement were the use of accessible language and the willingness to work in interdisciplinary teams, as well as a more thorough engagement with public debates and contemporary challenges in an interconnected world.

Max Schnepf is a graduate student in the research master’s program in social sciences at the University of Amsterdam. His thematic interests include gender and sexuality, queer anthropology, and science and technology studies. Currently he is conducting ethnographic research for his master’s thesis on body modifications in a hairdressing salon in Berlin.